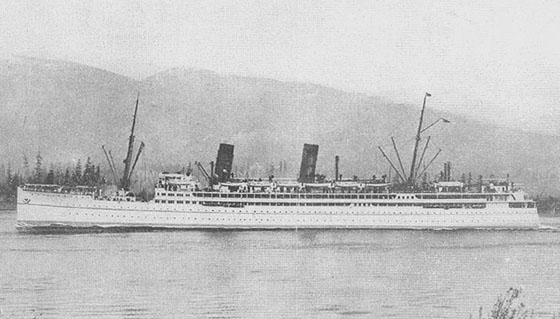 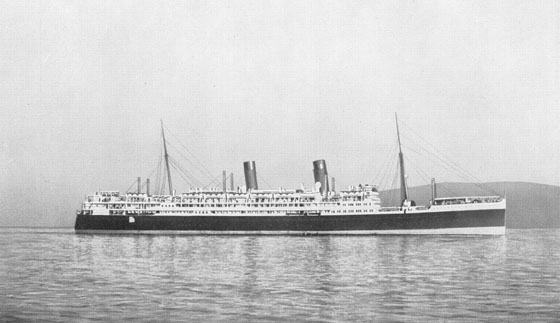 1931  :  Due to potential competition from the Matson Line, ownership was transferred to Canadia-Australasian Line of which Canadian Pacific Railways (CPR) were joint-owners along with the Union Steamship Company.

(When ordered, M.V. Aorangi was the largest motorship them known in the world)

A SUMMARY OF THE CAREER OF RMS AORANGI

Vessel was named after Mount Aorangi on New Zealand's South Island.  Aorangi is from the Maori language and means 'cloud in the sky'.  Her maiden voyage commenced from Southampton on 2nd January 1925, bound for Los Angeles and Vancouver, arriving there on 30th January 1925 after a voyage of 9,047 miles at a mean speed of 17 knots.  The ship then commenced her maiden Pacific voyage to Honolulu, Suva, Aukland, Wellington and Sydney. This was to become her regular routing for several years.

On Christmas Eve of 1926, M.V. Aorangi collided with the American submarine R5 whilst departing Honolulu for Suva.  Investigators found the large liner was to blame which they alleged had backed into the submarine when clearing the port.

From as early as1938, many German Jews were transported from Central Euorpoean ports to New Zealand and Australia on the S. S. Aorangi, fleeing their countries due to the troubled politics of Europe.

In early September 1939 the vessel, whilst operating under blackout conditions and steering a zig-zag course in the vicinity of Honolulu, picked up radio transmissions from four German vessels sailing in the North Pacific.

Although the routes plied by the Aorangi were far removed from the major conflict areas of Europe, there was still some considerable dangers in trading in New Zealand and Australian waters, illustrated no better than the loss of her sister ship RMS Niagara, which also worked the Sydney – Vancouver route, in June 1940 when she struck the minefield that had been laid by the German Commerce Raider 'Orion'.

In 1940, Aorangi sailed with troops from New Zealand to Fiji.

In 1941, Aorangi was engaged in the transportation of troops from Australia to Canada, then later in the year she was requisitioned by the British Ministry of War Transport and proceeded from Sydney to the UK to undergo conversion to troop ship service. After conversion, she sailed with convoys carrying troops and supplies to the Near East, Middle East and India.  She was also engaged in bringing US and Canadian troops to Europe. By this time the vessel was classified a DEMS including the installion of Degaussing Gear and a variety of armaments.

In early 1942 sailed from Singapore for Freemantle, with many evacuees on board.  Convoy escort duties and troop carrying continued through 1942 to 1944 in all oceans.  In May 1944, S.S. Aorangi was fitting out as an accommodation ship for small craft personnel.  During the Normandy invasion, she served as a depot 'mother ship' for a fleet of tugs and auxiliary ships, providing food, water, ammunition, engine parts and relief crews. Her hospital took in wounded men from the beachheads.

Following her D-Day and Normandy operations, the liner was converted to serve as the Commodore Ship and joined the Pacific Fleet at Hong Kong. After the Japanese surrender, she remained in Hong Kong, serving as an accommodation ship for men released from war service and waiting to go home.

During the war years it was estimated that the S.S. Aorangi transported 36,000 troops and evacuated 5,500 refugees from war zones.

After a lengthy refit on return to her Owners, Aorangi resumed service in August 1948 with accommodation now arranged for 212 x 1st Class, 170 x Cabin Class and 104 x 3rd Class passengers for the Vancouver-Australia service.

Continued voyages between Australia and Canada

06-04-1954  :  Vessel's hulk delivered to the West of Scotland Shipbreaking Company LImited of Troon