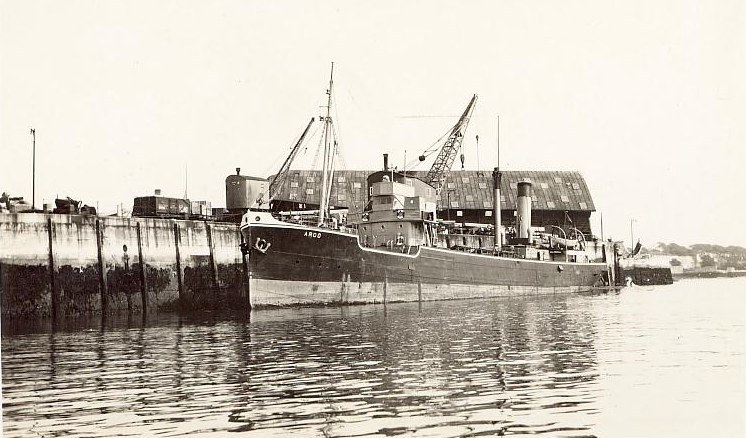 On 23-01-1917, whilst trading as ARGO in the North Sea, she came under attack from a German submarine. The U-Boat opened up with her deck gun but the British freighter turned out of danger and, with her superior speed, was able to prevent the loss of the ship.

19-12-1917: Vessel was purchased by the Admiralty, her Port of Registration changed from Glasgow to London, and the ship assigned the duty of a Coastal Stores Carrier.

During the years 1917 through 1919 this vessel was engaged in war service for the Admiralty as a Decoy Ship, sailing under the following names on behalf of the Admiralty as a Q-Ship :  LOTHBURY, SARUSAN and STEAD and was fitted out with 1 x 4 inch gun, 1 x 15 pounder gun and 1 x 12 pounder gun.  Allocated Pennant Nos. N13 and N08.

12-10-1938  :  Arrived at Rosyth where she was reduced to a hulk for the temporary storage of munitions and later towed to Medway and moored there

1947  :  Hulked at the R.N. Armaments depot at Fort William and placed on the Disposal List

August 1949  :  Sold to BISCO for scrap and broken up at Troon's WSSCL facility.