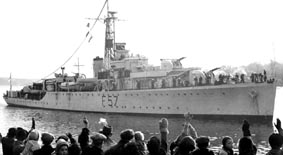 The Black Swan class was a lengthened version of the earlier Egret-Class sloops.   The Class-named twin-screw vessel was laid down by Yarrow Shipbuilders on 20 June 1938, launched on 7 July 1939, and commissioned on 27 January 1940.

When completed, HMS Black Swan was not fitted with the planned quadruple pom-pom, but with two quadruple Vickers .50 machine gun mounts fitted instead. The pom-pom was installed in May 1941, and the ineffective machine guns replaced by a single Oerlikon 20 mm cannon in September that year. The Hedgehog anti-submarine weapon and two more 20 mm cannon was fitted in June 1942, and a further three cannon were fitted in 1943. The ship's depth charge complement was increased to 110 during the war.

In her primary role of convoy escort, HMS Black Swan carried out escort duties for no less than 85 Convoys in the period February 1940 – May 1945.

HMS Black Swan was initially deployed on convoy escort missions along the British East Coast, before the German invasion of Norway caused her to be attached to the Home Fleet, where she was used to provide anti-aircraft cover to the Allied landings at Åndalsnes. HMS Black Swan was heavily engaged by German bombers before being hit by a bomb which passed through the ship before exploding on 27 April 1940.

After repairs, at Falmouth, in June 1940 HMS Black Swan returned to escort duty in the North Sea, before being damaged by a mine on 1 November 1940. This time, the ship was under repair, at Dundee, until May 1941, when she was transferred to Western Approaches command, esorting convoys in the Irish Sea. HMS Black Swan was again slightly damaged by bombing in August that year, and was transferred to Londonderry as part of the 37th Escort Group, escorting convoys to and from Gibraltar.

HMS Black Swan escorted convoys in support of Operation Torch in October 1942.  On 2 April 1943, when escorting Convoy OS 45, from Liverpool to Freetown, HMS Black Swan, and the Corvette HMS Stonecrop, sank the top-scoring U-boat U-124 off the coast of Portugal.

During 1943, HMS Black Swan for a short time saw action near Iceland to provide escort against the U-Boat threat. After which she served in the Mediterranean, on Malta and Adriatic convoy protection duties. From there, HMS Black Swan passed through the Suez Canal en route to the Asia / Far East and Pacific theatres against the Japanese forces. The ship was on active duties as far as Australia and the Philippine Islands.

At the cease of hostilities in 1945, HMS Black Swan followed the cruiser HMS Belfast into Shanghai and were the first Royal Navy warships to liberate the British concentration camps run by the Japanese.

In 1949 she took part in the Yangtze Incident, when she, with others went to aid of HMS Amethyst.  HMS Black Swan suffered 12 men wounded, and severe damage to her superstructure in a fierce engagement with Chinese batteries, and fell back. Overall the failed relief effort cost 46 killed and 64 injured. HMS Black Swan also served in the Korean War and was involved in the Battle of Chumonchin Chan. After the outbreak of the Korean war the ship took part in patrol and support of military operations off the west coast of Korea with other snips of her Flotilla serving under UN Command.

In March 1952 she sailed for Portsmouth to pay off and was Laid-up in Reserve, initially at Devonport and later transferred  to Lisahally, Northern Ireland. The ship was placed on the Disposal List in 1956 and sold to West of  Scotland Shipbreakers for demolition. She arrived at the shipbreaker’s yard at Troon, Ayrshire on 13th September 1956.