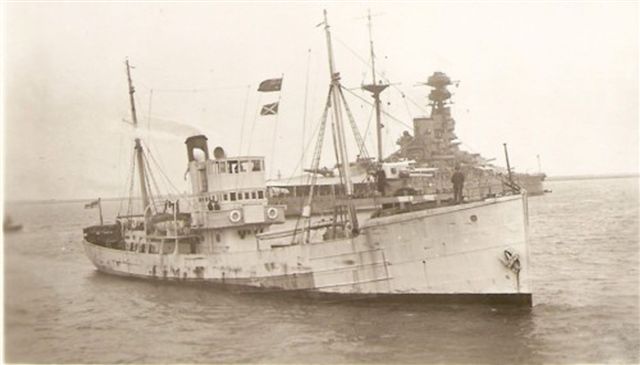 1935  :  Acquired by the Royal Navy for conversion to 'Gem' Class Anti-Submarine Trawler, renamed HMS RUBY and allocated the Pendant No. T24

After being requisitioned by the Admiralty, vessel fitted out for minesweeping and escort-patrol duties, mainly in British waters and the English Channel.  1 x 4 inch deck-gun installed.  Took part in the Normandy Landings in 1944.

Not long after becoming a Dinas Trawler, during 1952, whilst returning from a fishing trip in the Iceland area, Carella with a crew of 18 on board ignored warnings given and sailed through an area off the coast of Lewis, in the Outer Hebrides, where secret biological testing was taking place involving biological agents of a dangerous and harmful nature.  Royal Navy and Porton Down scientists were running tests (using 3,492 guinea pigs and 83 monkeys) to test the effects of pneumonic and bubonic plague and brucelosis.  Carella sailed though a cloud of these agents and for some time after were covertly monitored for any signs of plague (Yersinia Pestis) The issue went to the highest level of the Government of the day but was covered up very effectively, and indeed it was not until some 50 years later that crewmembers learned about it from reporters.

In April 1959, Carella was again in the news when she allegedly fished inside the Icelandic four-mile limit.

On 18-11-1959 Carella sailed out of Fleetwood for the last time and made pasage to Troon, Scotland where she has been sold for breaking as detailed above.  She arrived at Troon 24 hours later.