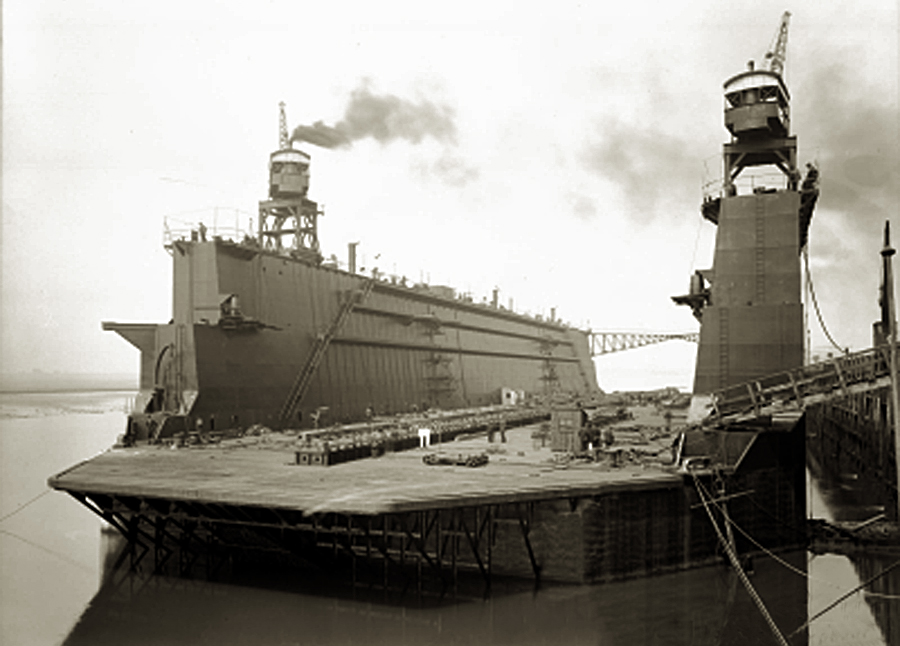 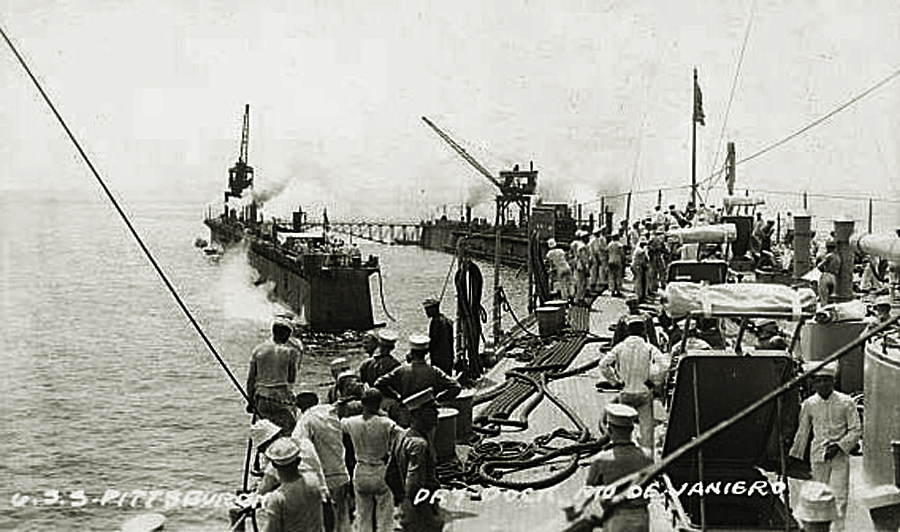 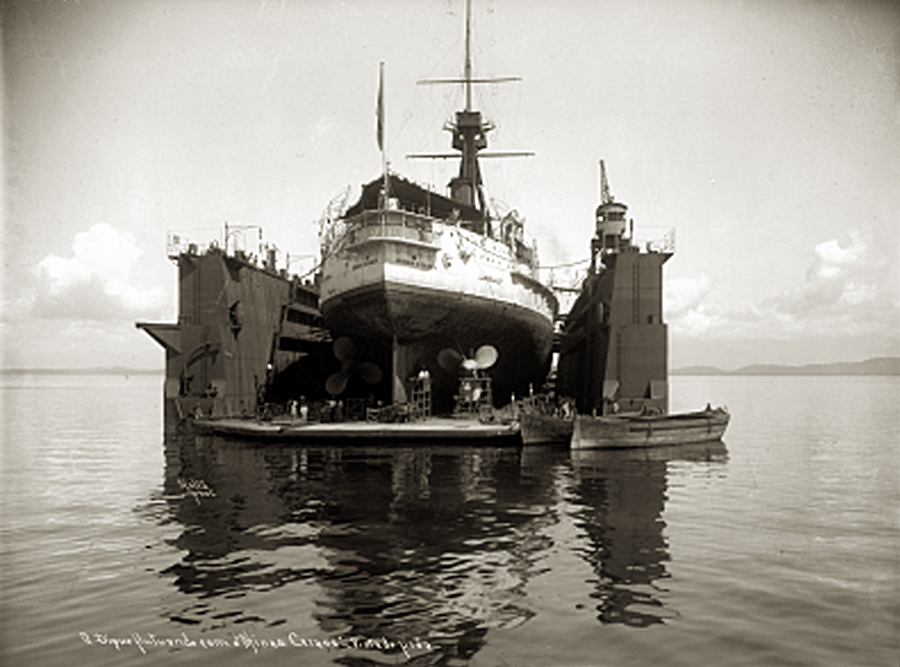 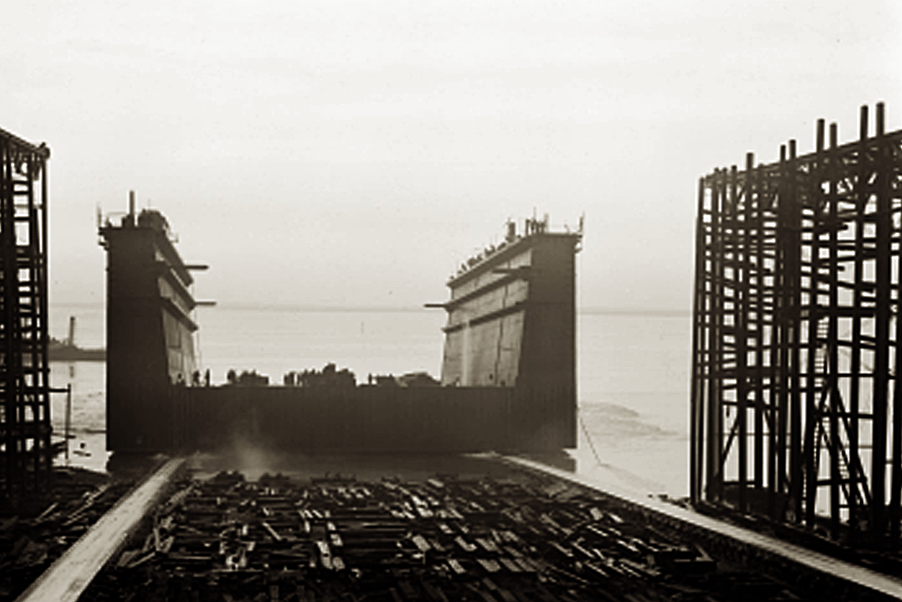 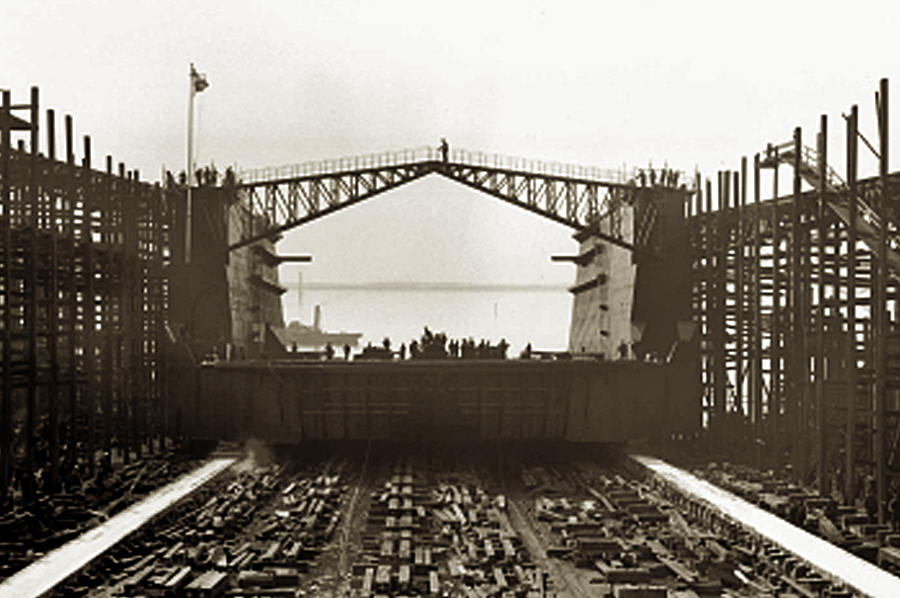 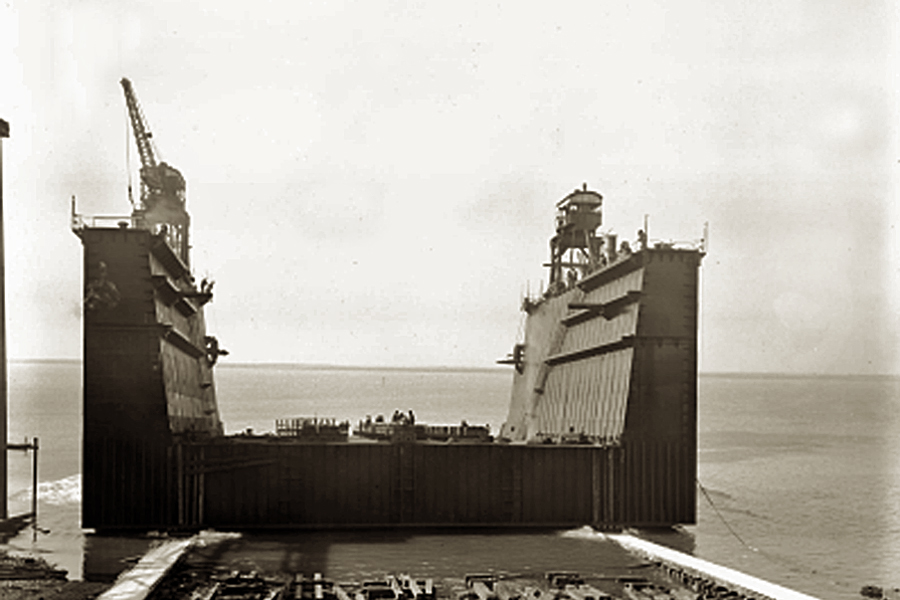 Only limited information has been found to date for this arrival in 1927 from the Gareloch.

In 1906, the Brazilian government embarked upon a large naval building program to replace it’s obsolescent navy. This program included the building of three battleships, the contract being placed with Armstrong Whitworth. Two of the ships, Minas Geraes, and Rio de Janeiro, were laid down at Armstrong’s yard at Elswick, and the third, Sao Paulo, was sub-contracted to Vickers at Barrow.

At the same time, the Brazilians realized that they would not have any docking facilities for these 20,000 ton (nominal) vessels and, in 1909, tenders were invited from Europe for the construction of a floating dock to accommodate them.

Minas Geraes was finally launched on the 10th of September 1908 (after all three of the Brazilian ships were completely re-designed), and completed on the 6th of January 1910, arriving at Rio de Janeiro in April 1910.

Records held in the Vickers photographic archive show Minas Geraes in the floating dock on the 23rd of December 1910, indicating that the photographs must therefore have been taken in Rio de Janeiro.  Significantly, one photograph of the dock is captioned:

The battleship Rio de Janeiro was 652 feet overall, compared with 543 feet for Minas Geraes and Sao Paulo.  The Rio de Janeiro was launched on the 22nd of January 1913, but was sold to Turkey later in the year as a result of political changes and a severe decline in the Brazilian economy.

It is assumed the extension ordered at 160 feet long was in the completion stages around about 1912, but following the cancellation by Brazil on the disposal of Rio de Janeiro, and an expression of interest in acquisition by the British Admiralty, the extension was increased from 160 feet to 310 feet to convert it to a useful docking facility. This is believed to have taken place between 1918 and 1919.

With the end of the Great War, the Admiralty no longer had a need for the extended dock section, and following the acquisition of several large ex-German Floating Docks as war reparations, the small Dock was laid up in the Gareloch and finally disposed of by the Admiralty, sold to  a Mr. A. Fletcher.  Later still it was sold for scrapping and arrived at Troon for demolition by the West of Scotland Shipbreaking Company at Troon, South Ayrshire.

[ It has not been established whether the modified FD was given an official name or number, hence the above title 'Floating Dock'.  It was at one time thought to have been AFD 2 but this was the identification of a Floating Dock that was moored at HMS Dolphin, Hasler Creek, from its construction in 1906 until sometime in the late 1950s.  The above history was compiled with the assistance of Dr. I. Buxton ]

The photographs shown below are courtesy of the excellent World Naval Ships Forum and are of the Floating Dock AFFONSO PENNA for which the subject extension dock section was originally intended.  Whilst not directly related to this specific Troon breaking, they nevertheless indicate the dimensional aspects on the extension that was constructed.