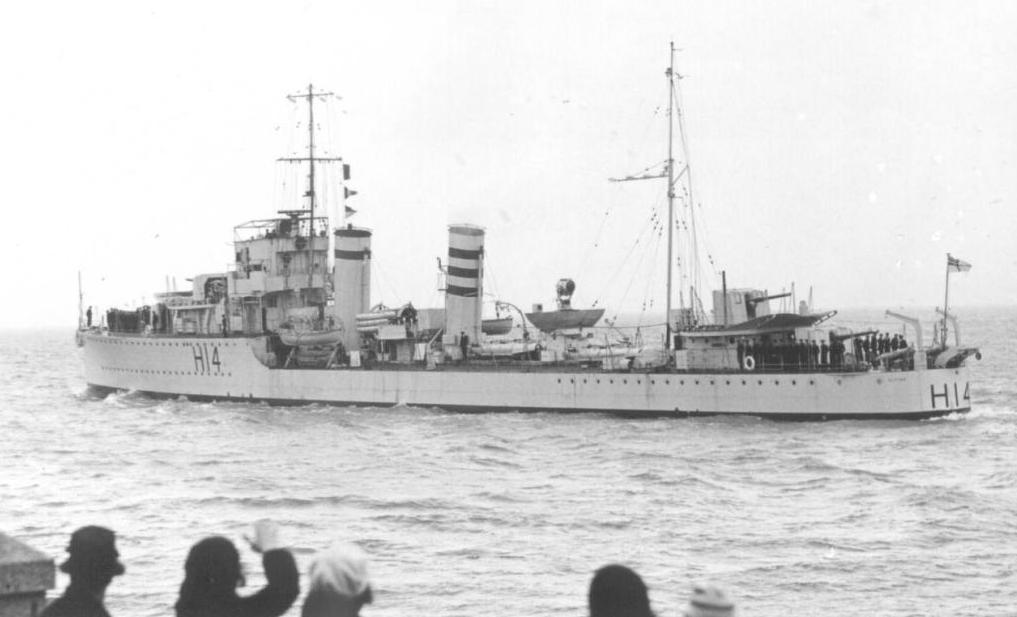 The Wartime Career of HMS Anthony

She was deployed with the 18th Destroyer Flotilla at Portland on the outbreak of war, and served in the English Channel and the South Western Approaches.  In November HMS Anthony was transferred to the 23rd Destroyer Flotilla, operating on the East coast.

In January 1940 she and her sisters HMS Achates and HMS Arrow escorted the Battleship HMS Royal Sovereign part of the way to Halifax. HMS Anthony transferred to Portsmouth in March, joining the 16th Destroyer Flotilla, and in May took part in the Dunkirk evacuation.

She eventually rescued 3,000 personnel, but on 30 May she sustained some damage in an air attack and had to remain in port for repairs. She returned to duty with the flotilla in June, now based at Harwich. Assigned to the Home Fleet she carried out convoy escort and anti-submarine duties, moving to join the 12th Destroyer Flotilla at Greenock in September. On 27 September rescued several survivors from the torpedoed SS City of Benares.

By November HMS Anthony was with the 4th Escort Group, and remained active in the Western Approaches. In February she was damaged in an air raid on the shipping in the River Clyde, but returned to service with the 3rd Destroyer Flotilla the following month. She spent the next few months escorting ships involved in minelaying operations, and on 23 May formed part of the escort for HMS Hood and HMS Prince of Wales as they tracked the German battleship Bismarck. She was detached to refuel at Iceland on 24 May, and so missed the Battle of the Denmark Strait where HMS Hood was sunk, but afterwards rejoined HMS Prince of Wales. Further escort duties followed, with operations off the Norwegian coast in July and August, including participating in Operation Gauntlet, the raid on Spitsbergen on 19 August.

On 29 August HMS Anthony formed part of convoy PQ 1 to Russia, and also covered the returning convoy QP 1 with RFA Black Ranger.  After refitting in the Humber she moved to Gibraltar in January 1942, escorting convoys from the Clyde to Gibraltar and back, and covering warships making deliveries of Spitfires to Malta.  In late March she was nominated to join Force H to support Operation Ironclad, the assault on Diego Suarez, Madagascar.

At a crucial moment, during Operation Ironclad, the main British landing force was held up west of Diego Suarez by unexpectedly stiff Vichy French resistance. The deadlock was broken when Admiral Syfret dispatched HMS Anthony to dash straight past the harbour defences of Diego Suarez and land 50 Royal Marines amidst the Vichy rear area. The Marines created "a disturbance in the town out of all proportion to their numbers" and the Vichy defence was soon broken. Diego Suarez was surrendered on 7 May.

The operation was concluded successfully in May, after which HMS Anthony remained in the Mediterranean. In September she escorted HMS Royal Sovereign to the United States, returning to European waters in October as an escort for troop convoys for Operation Torch.  HMS Anthony was refitted in late 1942, and deployed with the 13th Destroyer Flotilla in early 1943, spending the first half of the year escorting convoys along the West African coast, and in the Western Mediterranean.

She supported the Allied invasion of Sicily in July, and spent the rest of the year escorting convoys in the Mediterranean. On 24 February 1944 she, HMS Wishart and aircraft from No. 202 Squadron RAF and the US Navy sank U-761, West of Gibraltar.  HMS Anthony returned to Britain in September, escorting convoys in the Western Approaches and the English Channel. On 24 December 1944 she and HMS Brilliant were escorting the troopship S.S. Leopoldville when the Leopoldville was torpedoed and sunk by U-486 with heavy loss of life.

In early 1945, HMS Anthony was converted into an air target ship, to train new aircrew in warship identification, and methods of attack. She fulfilled this role for the rest of the war, and until January 1946.

HMS Anthony was reduced to the Reserve on 27 March 1946, and put up for disposal. She was reactivated in September however, and used for damage control trials until February 1948. She was sold for scrapping on 21 February, and was towed to the West of Scotland Shipbreaking facilities at Troon, Ayrshire, where she arrived on 11th of May 1948.