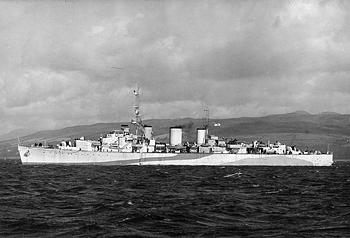 The Career of HMS Ariadne

Her first duty was to lay mines off the coast of Norway. She was also one of the ships taking part in Operation Stonewall. She then left Home waters in January 1944 to join the United States Seventh Fleet in the Pacific Ocean theatre of war.

In June 1944 she laid 146 mines off the northern coast of New Guinea, and when landings were made in the Mapia Group of islands in November 1944, HMS Ariadne was used to carry US Army soldiers. During her period of active service she laid 1,352 mines.

After the end of the war, HMS Ariadne was used to repatriate British prisoners of war from Japan and as a mailship due to her speed. She was paid off into the Reserve Fleet at Sheerness, and did not see service again, apart from a short trial after a refit in the 1950s. This involved the replacement of her light anti-aircraft guns with more modern weapons.

She was finally sold to W.H. Arnott Young for scrapping and arrived at Dalmuir in February 1965. She was then partially dismantled at Dalmuir with final demolition by the West of Scotland Shipbreaking Compnay of Troon, where she arrived in early June 1965.