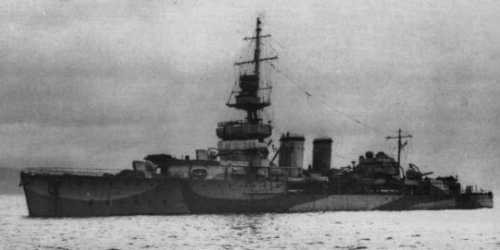 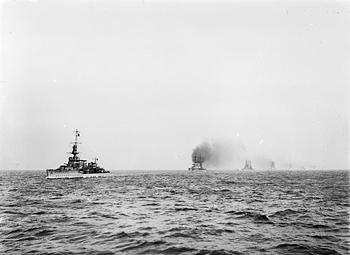 03-09-1945  :  HMS Cardiff paid off and reduced to reserve status, laid up in the Gareloch and placed on the Disposal List

Commissioned for duty in the Grand Fleet with the 6th Light Cruiser Squadron, deployed in the North Sea and North-West Approaches based out of Scapa Flow.  Took part in action against German warships in Heligoland Bight then continued in deployment with the Squadron at Scapa Flow.

Continued Squadron duties in the Grand Fleet and, in November, lead the surrendered German High Seas Fleet into Scapa Flow. In December, nominated for service in the Baltic in support of military operations against Bolshevik forces.

Deployed with Squadron in Baltic and nominated for service as Flagship 3rd Light Cruiser Squadron in the Mediterranean, this commission to last for two years and six months.  Refits carried out in the years 1919 through 1927, both in Malta and back in the United Kingdom.  During her Mediterranean assignment she was involved in the pprotection of British interests during the unrest in Greece and Turkey.

Mediterranean services continued in January and February.  March through May spent in refitting in UK. Returned to Mediterranean in June and resumed her Squadron previous deployment

Continued her deployment until August when relieved by HMS Curacoa to enable long refit at Devonport, where she arrived in October.

Post refit trials throughout January. February / March – nominated for service as Flagship of the 6th Cruiser Squadron on the African Station. Folloowing work-up in Home waters, set off for her new South African role in May, arriving at her base – Simonstown – in June.  Deployed for visits and exercises in the South Atlantic and Indian Ocean.

Continued her African Station deployment until nominated for transfer to the Reserve Fleet.  Sailed to UK in July for paying off and placement within the Reserve Fleet.  In service at Chatham for training and administration of other ships in Reserve.

Deployment at Chatham as Flagship Reserve Fleet, for training duties.

Deployment at Chatham continued.  Attended Silver Jubilee Review of the Fleet by HM King George V at Spithead in July.

Deployment at Chatam continued.  Attended the Coronation Review of the Fleet by HM King George VI at Spitherad in May.

Deployed at Chatham as Flagship Reserve Fleet. Nominated for operational service with the 5th Cruiser Squadron, China Station later in the year.  Recommissioned in July and deployed in Home Waters to prepare for foreign service.  Arrived in late Autumn and deployed on China Station for visits and exercises.

Continued on the China Station until May then returned to UK for refit at Devonport.  Attended Review of Reserve Fleet by HM King Geroge VI at Weymouth Bay in August then commenced preparations for war in view of the political situation.  Assigned to the 12th Cruiser Squadron and despatched to Scapa Flow for Northern Patrol duty to intercept German shipping attesting to return to Germany to enforce a blockade. From September until December, undertook a total of nine war patrols but withdrawn from Northern Patrols in mid-December as this class of Cruiser had been found unsuitable for service in the Atlantic, arriving at Devonport in late December for repairs to weather damage.

Rejoined the Home Fleet for service with the 2nd Cruiser Squadron and deployed on Convoy Defence and Home Waters Patrol.  Later deployed in Nore Command area in support of the evacuation of British and Allied troops and civilians from French ports (Operation Cycle).  Following this, deployed at Sheerness for anti-invasion patrol in North Sea and English Channel.  In August, deployed in the Humber area from Scapa Flow to intercept enemy craft during invasion scare, then returned to patrol duties in the N. W. Approaches and North Sea.  In October, withdrawn from operational service, and prepared for service as a Gunnery Training Ship by H M Dockyard, Portsmouth.  Later in year, set course for the Clyde for gunnery training based at Greenock and carried out training in use of close-range A/A weapons in the Clyde area.

Continued deployment in gunnery training duties throughout year.  Type 290 radar euipment installed to assist in early detection of enemy aircraft and shipping.  This equipment was later replaced by the more reliable centimetric Type 271

Continued deployment in gunnery training duties throughout year.  Used for Air Ministry bombing trials and exercises during this year.

Deployment for previous trials continued until May.  After VE Day, ceased deployment as a training ship and scheduled for despatch to a Clyde shipyard for refit, but this was cancelled when nominated for reduction to the Reserve Fleet.  Paid off in September and reduced to Reserve status, then laid up at the Gareloch in Scotland.