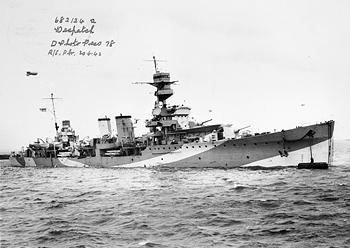 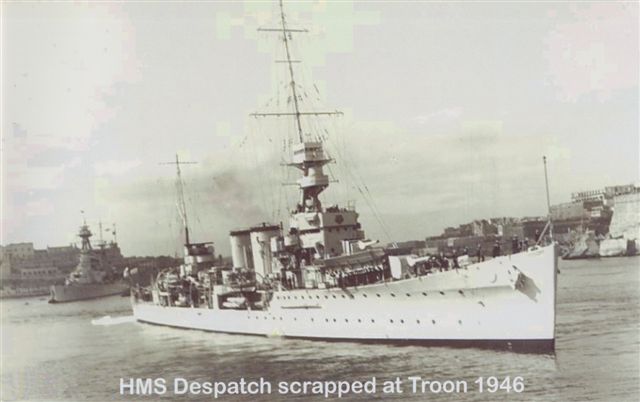 Hulk arrived down from Dalmuir.    HMS Despatch, Pennant Number D 30, was a Danae-class Light Cruiser launched by the Fairfield Shipbuilding and Engineering of Govan in 1919.   She displaced 4,850 tons and had a top speed of 29 knots.  Most of her WWll career was spent on convoy escort duties. She arrived in Troon in May 1946, to be 'despatched'.

HMS DESPATCH was ordered in March 1918

The Career of HMS Despatch

HMS Despatch did not enter service until June 1922. On commissioning, she went out to the China Station, 5th LCS, until 1927, then served on the America and West Indies Station with the 8th Cruiser Squadron until the summer of 1931, when she reduced to reserve.

After a refit which lasted until 1933, HMS Despatch recommissioned on 3 February 1933 for the 3rd Cruiser Squadron and served in the Mediterranean until 24 November 1937, when she left Malta for home. She then spent the years up to the war in reserve and on training duties.

She joined the 8th Cruiser Squadron on the America and West Indies Station on the outbreak of war. In the South Atlantic Command, Despatch captured the German merchantmen Dusseldorf (4,930 GRT) off Punta Caldera, in Chilean waters in December 1939, which was taken as a prize ship.  Then, in March 1940, she intercepted the following German merchant vessels:

[All the above cargo ships self-scuttled on seeing the British warship approaching, to avoid capture and falling into the hands of the Allies as a prize ship]

She had also been involved, during late 1940, in the Mediterranean area, providing escort support services to the Gibraltar, Alexandria and Malta convoys, and was one of the Allied warships that took part in the Battle of Cape Spartivento against the Italian naval fleet

She remained on this station until 1942, apart from a period with Force H in November 1940. In the spring of 1942 the ship was under refit in Britain, then went to the South Atlantic Command until 1943. By October that year she was back in Portsmouth, and was under refit there until May 1944, after which she was attached to the escort forces as headquarters ship for the invasion of Normandy in June 1944. In September 1944 she was put in reserve, laid up at Falmouth from October through December 1944, then from February through August of 1945 she served as an accommodation ship.

HMS Despatch was handed over for breaking up on 5 April 1946, and subsequently arrived for scrapping at Arnott Young's Dalmuir and Troon shipbreaking facilites.