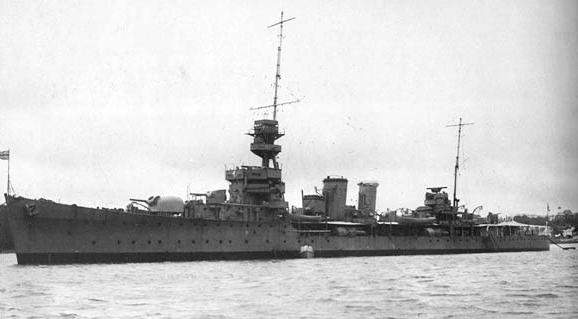 Built by Vickers-Armstrongs of Barrow and finished at HM Dockyard, Portsmouth.

Between the two world wars, HMS Diomede served the China station, Pacific waters and East Indies waters. She was placed in Reserve from 1936 but in September 1939, with the threat of a major war looming, she was assigned patrol duties serving in Home Waters with the Home Fleet's 7th Cruiser Squadron.

She was later attached to the 8th Squadron on the America and West Indies station, during which time, in DEcember 1940, she chased the German blockade-runner IDARWALD but, before a capture could be consolidated the German crew proceeded to scuttle their vessel of the coast of Cuba.

In early 1942, HMS Diomede joined the 9th Cruiser Squadron as part of the South Atlantic and West African Squadron.

In July 1942 she was 'retired' from front-line active service and despatched to Rosyth Dockyard for conversion to a Training Vessel.  The modifications were carried out from July 1942 through September 1943.

In 1945, with the war at an end, she was placed in Reserve then, on 5th April 1946, she was sold to Messrs Arnott Young for breaking, arriving at their Dalmuir shipbreaking facility on 13th May 1946.

Reduced to hulk status, she was then transferred down to the West of Scotland Shipbreaking facility at Troon in early December 1946.