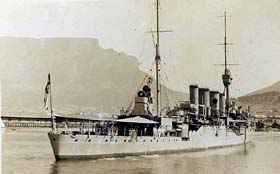 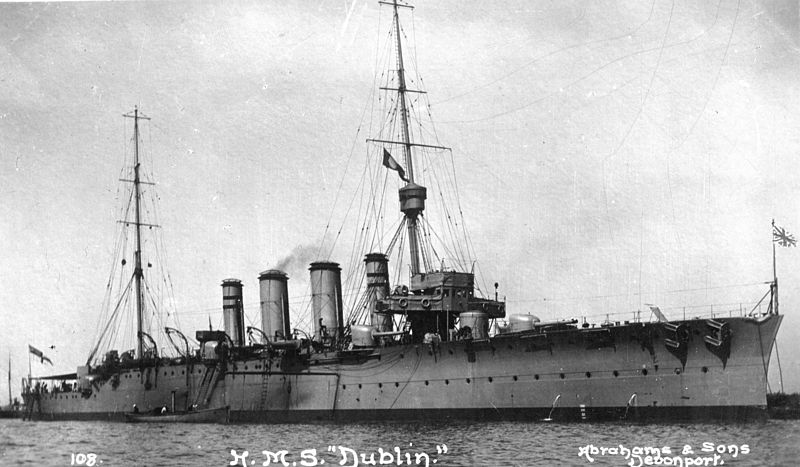 In February 1915, HMS Dublin was assigned to the Dardenelles and subsequently assisted HMS Implacable's assault on Gallipoli on 29-04-1915 at X-Beach.  She was then sent to Brindisi in May 1915.  On 09–06-1915 she was damaged by a torpedo strike from the Austrian submarine U-IV, but was able to get under way and at 17 knots made her way back to Brindisi.  Out of action for several months and had to return to the UK for a refit.

From 1916 through 1919, HMS Dublin served in Home Waters with the 2nd Light Cruiser Squadron as part of the Home Grand Fleet.  Participating in the 1916 Battle of Jutland, she suffered damage and casulaties when struck by 5 x 5 inch and 8 x 4.1 inch shells.  Subsequent repairs were not completed until 17-06-1916.  Continued operations in the North Sea in 1917, patrolling the East coast.

After the end of WWI, HMS Dublin was commissioned into the 6th Squadron, at the Africa Station, from January 1920 until 1924, with a short spell in April with the 3rd Squadron in the Mediterranean.

HMS Dublin was sent to Reserve at Nore in 1924.  Vessel sold on 30-07-1926 for disposal and demolition. On her passage to the Breaker's facilities in Troon, South Ayrshire, HMS Dublin ran aground and it was not until JJuly 1927 that she was refloated and continued her passage to Troon, where breaking started later that year.