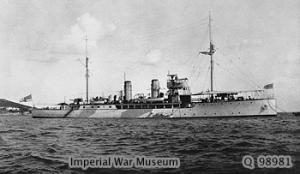 Served in a minesweeping role until 1917 then in a Convoy Escort role.

Served on the China Station durin g the early 1920s.  One of only two 'Acacia'-Class sloops to survive WWI and see service in WWII.

On Tuesday 9th of July 1940, off the Isle of Wight, she came under heavy enemy aircraft attack, dive-bombing Junkers 87, and was badly damaged with heavy losses of life.  She remained afloat and was brought back to base where she was duly repaired and converted into an Accommodation & Base Ship.  In this new guise she took up duties in 1941, for the remainder of the war, as a Harbour Guardship at Londonderry, Northern Ireland.