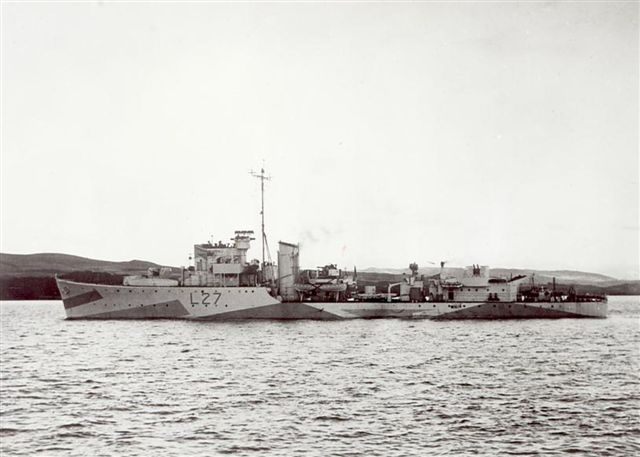 'Hunt'-Class III Destroyer for the Royal Navy.      (Goathland is the name of a foxhunt in Yorkshire).

HMS Goathland, pennant number L27, was laid down at Fairfield's of Govan in January of 1941, but wasn't launched for 13 months due to delay caused by air raids over the Clyde area in March of 1941. Most of the war was spent either escorting convoys or attacking enemy convoys. On 6th June 1944 at Normandy she was a Headquarters ship controlling the initial landings by the 8th Infantry Brigade.

On 24/07/1944, she struck a mine some 17 n.m. NNW of Courseulles (off Normandy) resulting in severe damage to hull, shafting and engines.  At war's end she was reduced to a reserve role at Gareloch and, thereafter, deemed at constructive total loss, she was towed in to the breakers at Troon.