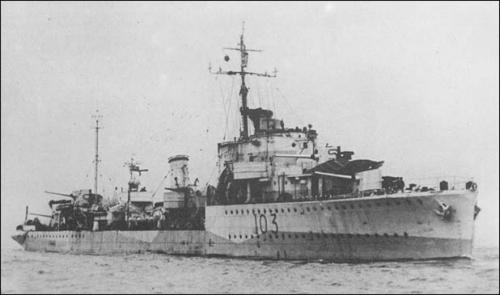 HMS Icarus was involved in many of the war theatres :

HMS Icarus was involved in the destruction of the following German U-Boats :

One of the most poignant incidents in her war at sea took place in May 1941 when, along with the Destroyers Achates, Antelope, Anthony, Echo and Electra, HMS Icarus was assigned to escort the Battlecruiser HMS Hood and the battleship HMS Prince of Wales which were on alert to cover the Northern Approaches to prevent the German Battleship 'Bismark' breaking out into the Atlantic.

At 06:01 hours on the morning of 24th May 1941 HMS Hood blew up when a 38mm shell from Bismarck struck her after magazine causing a huge explosion and the sinking of this capital ship in under two minutes.

When the Destroyers Electra, Icarus and Anthony arrived at the scene, instead of finding hundeds of men in the water, only three survivors, out of a total complement of 94 officers and 1,321 ratings were found alive.