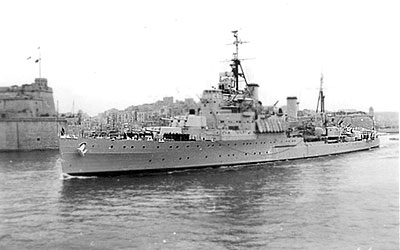 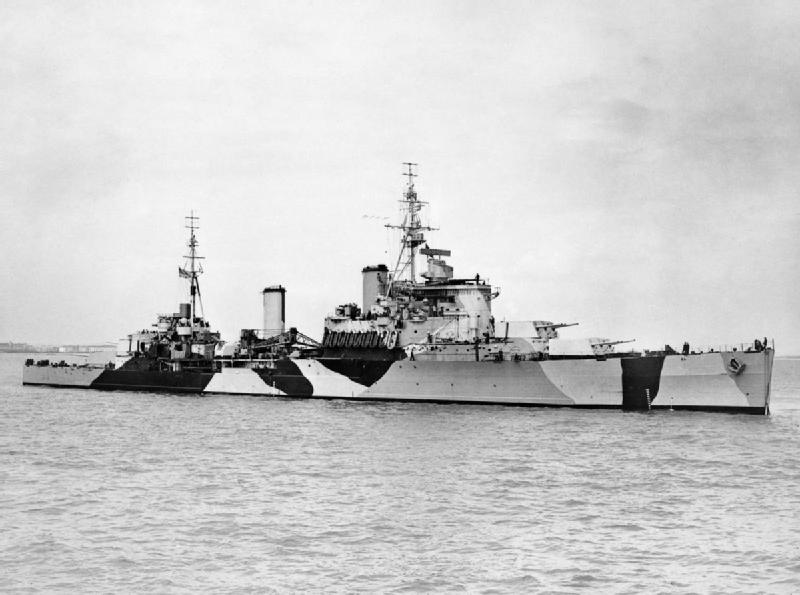 HMS Jamaica, a Crown Colony-class cruiser of the Royal Navy, was named after the island of Jamaica, which was a British possession when she was built in the late 1930s. The light cruiser spent almost her entire wartime career on Arctic convoy duties, except for a deployment south for the landings in North Africa in November 1942. She participated in the Battle of the Barents Sea in 1942 and the Battle of North Cape in 1943. Jamaica escorted several aircraft carriers in 1944 as they flew off airstrikes that attacked the German battleship Tirpitz in northern Norway. Late in the year she had an extensive refit to prepare her for service with the British Pacific Fleet, but the war ended before she reached the Pacific.

Jamaica spent the late 1940s in the Far East and on the North America and West Indies Station. When the Korean War began in 1950 she was ordered, in cooperation with the United States Navy, to bombard North Korean troops as they advanced down the eastern coast. The ship also provided fire support during the Inchon Landing later that year. Jamaica was refitted late in the year and returned to Great Britain in early 1951 where she was placed in Reserve.

She was recommissioned in 1954 for service with the Mediterranean Fleet. In 1955 Jamaica was used to play HMS Exeter in the Battle of the River Plate (film), in company with her wartime partner HMS Sheffield as HMS Ajax. In 1956 the ship participated in Operation Musketeer, the Anglo-French invasion of Egypt to seize control of the Suez Canal. Jamaica was paid off in 1958 and sold for scrap in 1960.

The career of HMS Jamaica

After working up, the ship provided distant cover to Convoy PQ 18 in September. She was assigned to the Centre Task Force of Operation Torch in early November and was unsuccessfully attacked by the French submarine Fresnel.  The Arctic convoys had been suspended at PQ 18, but were scheduled to resume on 15 December with Convoy JW 51A. HMS Jamaica and HMS Sheffield, with several escorting destroyers, formed Force R, under the command of Rear-Admiral Robert Burnett and were tasked to cover the convoy against any German surface ships. The convoy was not spotted by the Germans and arrived at the Kola Inlet without incident on 25 December.

Force R sailed from Kola on 27 December to rendezvous with Convoy JW 51B in the Norwegian Sea, but the convoy had been blown southwards by a major storm. Several of its ships had been separated during storm and they confused the radar of Force R's ships as to the true location of the convoy. Thus Force R was 30 miles (48 km) north of the convoy on the morning of 31 December when the heavy cruiser Admiral Hipper attacked the convoy. Admiral Hipper was first held at bay by the British destroyers HMS Onslow, HMS Obedient, HMS Obdurate and HMS Orwell. Initially driven off, Admiral Hipper returned, only to be engaged by Force R shortly before noon and was hit by three 6-inch shells from the cruisers. Two German destroyers, Z16 Friedrich Eckoldt and Z4 Richard Beitzen, misidentified Sheffield as Admiral Hipper and attempted to form up on her. Sheffield sank Friedrich Eckoldt at a range of 2 miles (3.2 km) while Jamaica unsuccessfully engaged Richard Beitzen.

Less than an hour later Force R spotted the pocket battleship Lutzow and Admiral Hipper and opened fire. Neither side scored any hits in the darkness before both sides turned away a few minutes later. Force R continued to track the German ships for several hours before they lost contact. Although the destroyer HMS Achates and the minesweeper HMS Bramble were sunk by the Kriegsmarine, the convoy reached the Kola Inlet intact. Force R remained at sea to protect Convoy RA 51 that was returning to Great Britain until relieved by HMS Berwick and HMS Kent.

Jamaica was relieved of escort duties on her return in January 1943 and had her main gun barrels replaced in March. She rejoined the Home Fleet, but was refitted in Portsmouth from July to September.Sometime during the year she received six twin power-operated 20-millimetre (0.8 in) AA guns as well as four single guns.During November she protected the convoys RA 54B, JW 54A, JW 54B and RA 54B, but was not engaged.On 15 December she was assigned to Force 2, the distant escort for Convoy JW 55A, with the battleship HMS Duke of York and four destroyers. Force 2 was commanded by Admiral Bruce Fraser, Commander-in-Chief of Home Fleet, in Duke of York. For the first time the British distant cover force escorted the convoy all the way to the Kola Inlet. Their passage was uneventful and Force 2 sailed on 18 December to refuel at Iceland. Before he reached his destination, Admiral Fraser received Ultra information that a sortie by the German battleship Scharnhorst was likely to attack Convoy JW 55B  –  already at sea.

German aerial reconnaissance spotted the convoy on 22 December, and Scharnhorst, escorted by five destroyers of the 4th Destroyer Flotilla, sailed on 25 December to intercept it. The resulting engagement became known as the Battle of North Cape.The Germans were spotted on the morning of 26 December and were engaged by the covering force that consisted of the cruisers HMS Belfast, HMS Sheffield, HMS Norfolk and four destroyers. Meanwhile HMS Jamaica and HMS Duke Of York approached from the south west, barring the Scharnhorst’s path of retreat. The German battleship turned for her base at Altafjord in the early afternoon after two brief encounters with the British cruisers. She was spotted by Duke of York's Type 273 radar at a range of 45,500 yards (41,600 m) and Duke of York opened fire half an hour later. Jamaica fired her first salvo a minute after, and hit Scharnhorst on her third broadside. She was forced to cease fire after 19 volleys as the German ship was faster in the heavy seas than the British ships, and was opening up the range despite heavy damage from the British shells. One shell from Duke of York's last volley penetrated into Scharnhorst's Number One boiler room and effectively destroyed it. This reduced the German ship's speed sufficiently for the British destroyers to catch up and make four torpedo hits using a pincer attack. This slowed the ship again, so that Jamaica and Duke of York also caught up and opened fire at a range of 10,400 yards (9,500 m). They hit the German ship continually, but she was not sinking after 20 minutes of firing so Jamaica was ordered to torpedo her. Two torpedoes from her first volley of three missed and the third misfired, so the cruiser had to turn about to fire her other broadside of three, two of which appeared to hit. Belfast and the destroyers also fired torpedoes before Scharnhorst finally sank.

Further convoys and the raids on the Tirpitz

In February–March 1944, Jamaica served as part of the covering forces for Convoys JW 57, JW 58 and RA 58.  She was detached from the latter to escort the aircraft carrier HMS Victorious as she launched an air strike against the German battleship Tirpitz as part of Operation Tungsten.  In July she formed part of the covering force for the carriers HMS Formidable, HMS Furious and HMS Indefatigable during an unsuccessful attack on the German battleship Tirpitz berthed in Kaafjord (Operation Mascot). Jamaica escorted the Convoys JW 59 and RA 59 in August–September, before starting a major refit in October that lasted until April 1945. The ship's 'X' turret (third from the front) was removed and replaced by two more 2-pounder mounts while her radar suite was modernized.

On 6 June the cruiser conveyed King George VI and the Queen on a visit the Channel Islands. Jamaica joined the 5th Cruiser Squadron at Colombo in October and replaced HMS Norfolk as the squadron flagship in April 1946. The ship returned to Devonport for a refit in November 1947 and was transferred to the North America and West Indies Station in August 1948 after its completion. She was sent to Hong Kong in April 1949 and remained in the Far East until the Korean War began in June 1950.

Fighting between North and South Korea had broken out on 25 June 1950, whilst Jamaica was on passage to Japan. She, and her escort HMS Black Swan, were ordered to rendezvous with the American light cruiser USS Juneau off the east coast of Korea to bombard advancing North Korean troops. On 2 July a North Korean supply convoy was returning from Chumunjin when it was spotted by the Allied ships. The escorting motor torpedo boats and motor gun boats turned to fight, but three torpedo boats and both gun boats were sunk without inflicting any damage on the Allied ships. They resumed bombarding coastal targets. Six days later Jamaica was hit by a 75-millimetre (3.0 in) shell that killed six and wounded five. On 15 August the ship bombarded captured harbour facilities in Kunsan. The following month, Jamaica participated in the preparatory bombardment of the island of Wolmi-do before the main landing on 15 September. During the landing itself she supported the southern flank of the assault and she was tasked to support the 1st Marine Regiment afterwards. Two days after the landing Jamaica and the American heavy cruiser USS Rochester were attacked by a pair of Yakovlev piston-engined fighters at dawn. One aircraft succeeded in strafing the ship, killing one sailor, before it was shot down by the ship's guns.

Jamaica was sent to refit in Singapore in October and then sailed for home after it was completed. She arrived in Plymouth in February 1952 and was placed in reserve. The ship was the flagship of the Reserve Fleet from May 1953 to 1954 when she was recommissioned for service with the Mediterranean Fleet. Assigned to the 1st Cruiser Squadron, she was refitted in Chatham Dockyard from June 1955 and rejoined her squadron. The ship participated in Operation Musketeer in November 1956. The ship led the bombardment force covering the Royal Marine landings at Port Said, but she was not permitted to fire her main guns as the Cabinet had banned naval gunfire support by guns larger than 4.5 inches (114 mm). Jamaica was placed in reserve again in September 1958 after a port visit to Kiel. She was sold on 14 November 1960 to BISCO. The ship arrived at Arnott Young's yards at Dalmuir on 20 December 1960 for scrapping.This was not completed until 15 August 1963 at Troon.