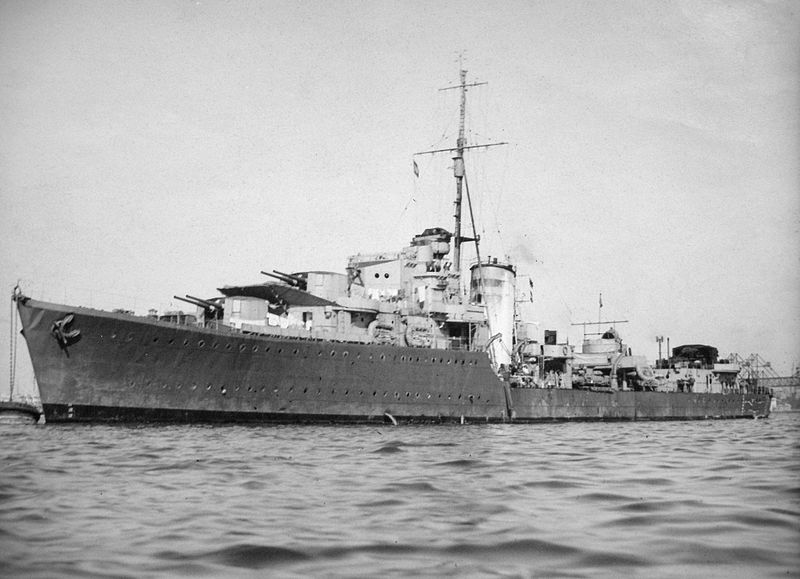 Propulsion  :  Twin-Screws driven by geared steam turbines with a power output of 40,000 SHP

She fought in several theatres during the war.  In September 1940, as part of the 5th Destroyer Flotilla, she scuttled HMS Ivanhoe which had struck a mine off Texel during the Texel Disaster.  In October 1940, she escorted HMS Revenge when she shelled Cherbourg.

A year later, she was involved at the action off Cape Spartivento on 27 November 1940.

For the next two years she was employed heavily in the Mediterranean and was involved in several major actions as well as several minor engagements.

In May 1941 she bombarded Benghazi in company with HM destroyers Jackal, Kashmir, Kelly and Kipling before heading to Crete on 20 May 1941. She survived the withdrawal  and by March 1942 she was a part of convoy MW10 which took part in the Second Battle of Sirte. Later in the year she was involved in diversionary attacks in support of Operation Pedestal and bombarded Rhodes.

On 16 April 1942 she landed troops from the 11th Battalion of the Royal Marines at Koufonisi near Crete to destroy a W/T station (Operation Lighter). In December 1942, in company with Janus, Javelin and Jervis, she sunk the Italian torpedo boat Lupo off Kerkennah Bank, Tunisia. In January 1943 she bombarded Zuara and in company with Nubian was responsible for sinking a variety of Italian supply ships and minesweepers. Several members of her crew were decorated for their part in destroying enemy ships and aircraft in the Mediterranean.

By June 1944 she was back in home waters and carried Winston Churchill and various other dignitaries across the English Channel during Operation Overlord.  She returned to the Mediterranean and took part in operations to liberate the Dodecanese. She bombarded Tilos and landed a party of Special Boat Service troops in November 1944.