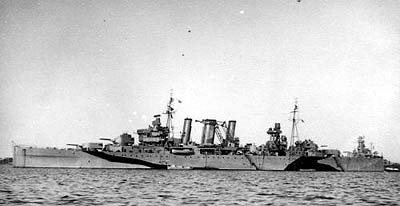 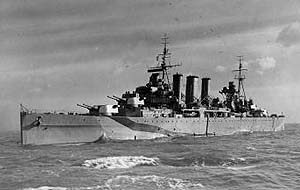 After commissioning, summer 1928, HMS Kent assigned to the China Station and remained in that capacity until the outbreak of WWII.

In late 1939 she was involved in the hunt for the German Battleship Admiral Graf Spee in the East Indies, thereafter assigned to convoy escort duties to Troop Convoys in Indian Ocean in early 1940s.

In mid-1940 she was transferred to the Mediterranean area but shortly after arrival suffered heavy damages when she was torpedoed, resulting a extensive repairs that took about one year.

Following repairs, HMS Kent was assigned to the Home Fleet and for the next few years was engaged in escort duties for convoys sailing to and from Russia.

In mid-1944 HMS Kent was involved in escort duties for British aircraft carriers as their aircraft launched aerial attacks on German shipping and Airfields in Norway.  Was Flagship of a Force that intercepted a German convoy of merchant and naval escort vessels , sinking two of the freighters and five of the escorts.

Paid off and placed in Reserve in early 1945.  Later used as a Target Ship.

22-01-1948  :  Sold for breaking to West of Scotland Shipbreaking Companny Limited of Troon