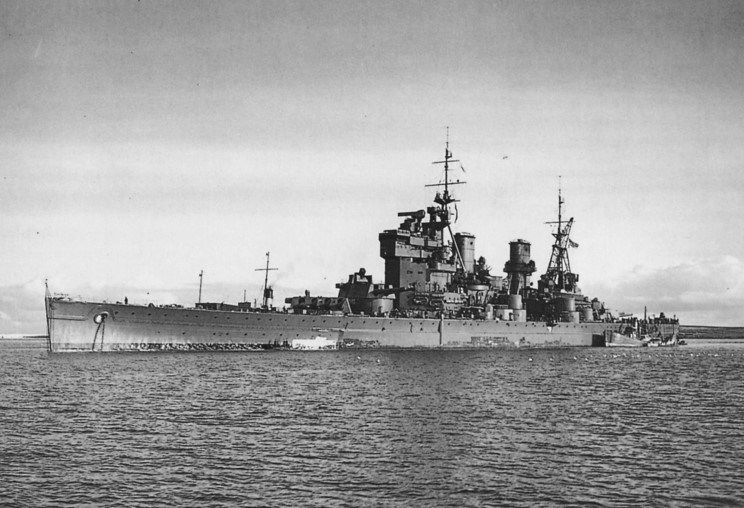 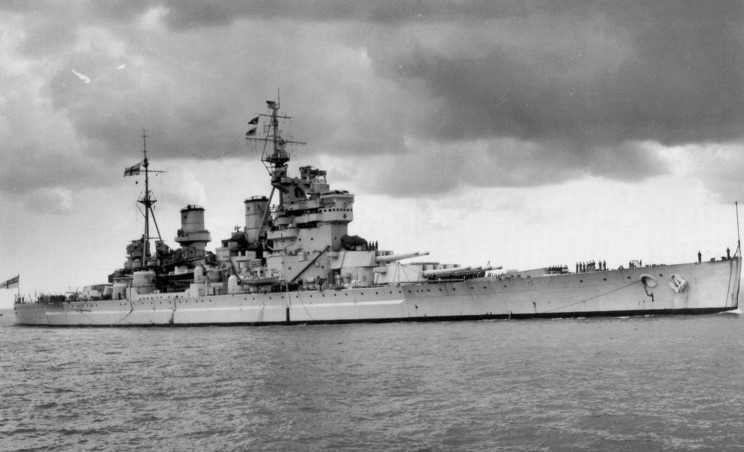 The first of her class to be completed, King George V was commissioned at her shipyard and sailed for Rosyth in Scotland on 16 October 1940; there she took on board her ammunition and began her sea trials. By the end of the year she had joined the Home Fleet at Scapa Flow. She crossed the Atlantic early in 1941 to take Lord Halifax, the Ambassador to the United States, to Annapolis and covered an east-bound convoy on her return, arriving back at Scapa Flow on 6 February. Her next task was to provide distant cover for Operation Claymore, the Royal Marines raid on the Lofoten islands off the north-west coast of Norway. She escorted further Atlantic convoys, HX 104 and HX 115 during March.

When Bismarck broke out into the Atlantic Ocean, King George V sailed on 22 May with HMS Victorious and eleven cruisers and destroyers in support of the cruiser patrols off Iceland. King George V was the flagship of Admiral Sir John Tovey, who commanded the force. King George V was still 300 to 400 miles away on the morning of 24 May, when HMS Prince of Wales and Hood engaged Bismarck. Hood was sunk and Prince of Wales was damaged and forced to retire. The German ship, although damaged, continued south.

The British re-located Bismarck at 10:30 on 26 May, when a Catalina flying boat of RAF Coastal Command sighted her, heading for the French port of Brest. Rodney and King George V were still about 125 miles away. The aircraft carrier HMS Ark Royal was ordered to launch an air attack, and at 22:25 her torpedo bombers, a flight of Fairey Swordfishes damaged Bismarck, slowing her down and jamming her rudder, forcing her to turn back out into the Atlantic, away from the safety of port. At 15:00 Rodney joined King George V and they maintained 22 knots – which was nearly maximum speed for Rodney. King George V had only 32 percent of her fuel left, Rodney only had enough to continue the chase at high speed until 8:00 the following day.

Admiral Tovey signalled his battle plan to Rodney just before sunrise on 27 May; she was free to manœuvre independently as long as she conformed generally to the movements of King George V. Both ships were to close the range to 15,000 yards as quickly as possible, then turn for broadside fire.

At 08:15 HMS Norfolk spotted Bismarck and turned away out of range. She soon sighted the other British ships off her starboard quarter, and informed them that Bismarck was roughly 50,000 yards to the southwest. By 08:43 King George V had Bismarck in sight, at 20,500 yards. Four minutes later Rodney opened fire. King George V followed suit in less than a minute. Bismarck answered almost immediately, straddling Rodney on her second salvo. By 08:59 King George V had closed to 16,000 yards and all her 14-inch guns were firing; Rodney was firing full 16-inch salvoes. Bismarck concentrated all her remaining guns on King George V, but only an occasional shell came close. At 09:14 King George V, at 12,000 yards, had opened fire with her 5.25-inch guns, and Rodney had moved to 8,500–9,000 yards.

At 09:27 a shell hit Bismarck, penetrating the hydraulic machinery in turret 'Anton' and disabled it, causing the guns to run down to maximum depression. Her topsides were wrecked, and a large fire burned amidships. By that time King George V was having trouble with her main battery, and every gun missed at least one salvo; due to failures in the safety interlocks for antiflash protection. Both Rodney and King George V had little fuel left and returned to port at very low speed, escorted by eleven destroyers to guard against German air or submarine attack. The next day, after the escort was reduced to three destroyers, four German aircraft did attack but scored no hits. Both King George V and Rodney returned to port safely, but the destroyer HMS Mashona, sent ahead to refuel, was bombed and sunk.

After repairs and adjustments to her guns, King George V attacked German shipping in the Glom Fjord, Norway, in October 1941. She then covered convoys to Russia. On 1 May 1942 she was operating with USS Washington as an escort to Convoy PQ 15, and collided with the destroyer HMS Punjabi, which had manoeuvred to avoid a mine and crossed her bow in dense fog. Punjabi was cut in two and King George V had 40 feet of her bow badly damaged. King George V entered the Gladstone Dock in Liverpool on 9 May for repairs by Cammell Laird, and returned to Scapa Flow on 1 July 1942 to resume convoy escort duty.

In May 1943, King George V was moved to Gibraltar in preparation for Operation Husky. King George V and her sister ship HMS Howe were allocated to the reserve covering group when the operation got under way on 1 July. The two ships bombarded Trapani in Sicily on 12 July and also helped defend against an air raid whilst in Algiers prior to departing for Operation Avalanche, (the Allied invasion of Italy). The two ships also bombarded the islands of Levanzo and Favignana, after which they were in the reserve group for the Salerno landings (Operation Avalanche) which began on 9 September.

King George V escorted part of the Italian Fleet, including the battleships Andrea Doria and Caio Duilio, to Malta after the armistice and with Howe provided cover for the 1st Airborne Division who were transported to Taranto in support of Operation Slapstick from 9 to 11 September by the cruiser USS Boise and the fast minelayer HMS Abdiel. The battleship then escorted a naval force which occupied the Italian naval base at Taranto. She later escorted surrendered Italian ships from Malta to Alexandria. After bombarding German positions during the Salerno landings, King George V returned to the United Kingdom.

King George V was in Liverpool for an overhaul from March to June, 1944; it included the installation of additional radar gear, more anti-aircraft guns, improved accommodation and ventilation. On 28 October 1944 King George V sailed from Scapa Flow under the command of Admiral Sir Bruce Fraser to join other Royal Navy units assembling at Trincomalee in Ceylon. A stop at Alexandria en route enabled her to divert to Milos in the Aegean Sea to bombard German positions there.

On 1 December she resumed her eastward journey, arriving in Trincomalee on 15 December. King George V got under way again on 16 January 1945. The flotilla, known as Task Force 63, comprised King George V, the aircraft carriers HMS Illustrious, Indomitable, Indefatigable and Victorious, four cruisers and ten destroyers. The first stage of the voyage was covering the 11,000 nautical miles to Sydney; en route the force attacked oil refineries on Sumatra in Operation Meridian. They also practised replenishment-at-sea and beat off a Japanese air attack, with KGV anti-aircraft crews shooting down one Mitsubishi Ki-21.

Joined by Howe and re-designated Task Force 57, the British Pacific Fleet was again involved in operations in late March 1945, when it launched attacks on the Sakishimo-Gunto airfields, a task it repeated in early May. On 4 May 1945 King George V led battleships and cruisers in a forty-five minute bombardment of Japanese air facilities in the Ryukyu Islands. As the Allies approached the Japanese homeland, King George V was dispatched in mid-July to join the US battleships in a bombardment of industrial installation at Hitachi. King George V fired 267 rounds from her 14-inch guns during this operation. The task force then moved on to Hamamatu in southern Honshu, where it carried out a further bombardment of aviation factories. During the Okinawa campaign, the battleship supported four fast carriers of the British Pacific Fleet. Her last offensive action was a night bombardment of Hamamatsu on 29 and 30 July 1945.

With the dropping of the atomic bombs on Hiroshima and Nagasaki and the surrender that followed, King George V moved with other units of the British Pacific Fleet into Tokyo Bay to be present at the surrender ceremonies.

In January 1946 she conveyed the Duke and Duchess of Gloucester on an official visit to Australia, returning to Portsmouth in March. She was flagship of the Home Fleet until December 1946, when she became a training vessel.

King George V's active naval career was terminated by the Royal Navy in June 1950, when she and her sister-ships went into reserve and were mothballed. King George V was the first large warship to be preserved in this fashion.

This involved sealing the armament, machinery and boilers against damp and installing dehumidifiers throughout. In December 1955, she was downgraded to extended reserve and in 1957 the decision was taken to scrap the four ships. The following year King George V was moved from her berth in Gareloch to the ship breaking firm of Arnott Young and Co. in Dalmuir to undergo dismantling.