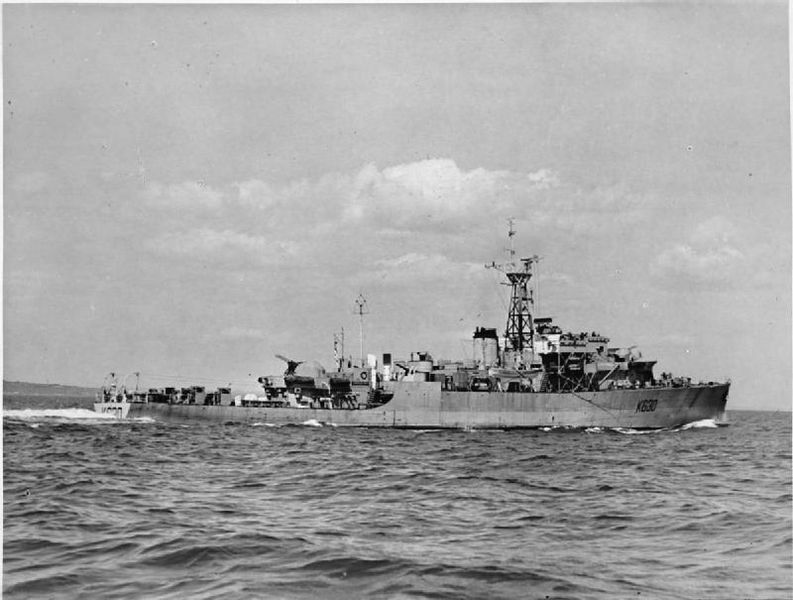 Originally ordered from Henry Robb of Leith in 1943 as the Loch-class frigate Loch Laxford, and laid down on 14 April 1944 as Admiralty Job No. J11861. However the contract was then changed, and the ship was completed to a revised design as a Bay-class anti-aircraft frigate, and launched on 28 December 1944 as HMS Cardigan Bay, the first Royal Navy ship to carry the name. She was completed on 25 June 1945.

After sea trials, on 18 August 1945 HMS Cardigan Bay joined the Mediterranean Fleet at Malta. She was deployed in the Aegean Sea and at Haifa to intercept immigrant ships bound for Palestine. In July 1947 she escorted SS President Warfield  to Famagusta, Cyprus, after placing a boarding party aboard, and in August escorted the British merchant ships Ocean Vigour, Empire Rival and Runnymede Park to Port-de-Bouc near Marseille, taking the immigrants from Exodus back to France. In early 1948 she intercepted the Liberty ships Pan York and Pan Crescent on passage from the Black Sea to Palestine with illegal immigrants.

Cardigan Bay carried out the usual programme of Fleet exercises and visits, also deploying for surveillance operations in the Adriatic Sea following the Corfu Channel Incident, acted as guard ship at Trieste and Aqaba, and performed patrol duties in the Red Sea. In 1948 her pennant number was changed to F630.

In July 1949, Cardigan Bay and sister ship St Brides Bay were transferred to the Eastern Fleet, based at Singapore, arriving there in August, for a series of exercises and patrols off Malaya and China, deploying on the Yangtze Patrol with St Brides Bay and the sloop Black Swan in November and December.

In October 1950 Cardigan Bay was detached for service with the United Nations as part of British and Commonwealth support for naval operations off Korea, sailing from Hong Kong on 17 November to Sasebo to join the UN Naval Task Group. In December she sailed on her first operational deployment off the west coast of Korea supporting UN personnel at Inchon. She remained there until mid-January 1951, then returned to Sasebo.

Released from UN duty, she was deployed at Hong Kong for exercises and guard ship duties until June. She then returned to Sasebo, and began her second Korean tour, patrolling the west coast, supporting the aircraft carrier HMS Glory during coastal bombardments, and preventing movements of enemy shipping. In July she escorted an American LCU to recover wreckage from a Mikoyan fighter aircraft which had crashed in shallow water south-west of Hanchon. Large parts of the aircraft were recovered using the LCUs crane and smaller components by divers, while HMS Glory and the cruiser HMS Kenya provided radar and air cover. Further offensive patrols and survey operations in Han River estuary followed until September, when she sailed to Hong Kong to refit.

HMS Cardigan Bay resumed service with UN Naval Task Force off Korea in January 1952 for patrol duties and naval gunfire support, until April, then sailed for Sasebo and Hong Kong for repairs and Flotilla exercises. In June she returned to Korea for further patrols and bombardments, and acted as an Air Control Ship during flying operations. Released in September she sailed for Hong Kong to refit.

Recommissioned for service in the 4th Frigate Squadron on 28 December, in January 1953 HMS Cardigan Bay sailed on her fifth tour of service with the UN Task Group off Korea. On 7 April she embarked American General Maxwell D. Taylor and the Commander of the Commonwealth Naval Forces Admiral Alan Scott-Moncrieff, and sailed to Ch'o-do Island, close to the mouth of the Taedong River to carry out a shore bombardment. Shortly afterwards HMS Cardigan Bay was involved in a collision with the Dutch frigate Johan Maurits van Nassau, sustaining some damage to her plating. Further damage was sustained when she was hit by the US Navy tug called in to assist. She sailed for Hong Kong in April for exercises and patrols off the west coast of Malaya supporting of operations against insurgents.

In July 1953 an armistice was agreed and hostilities in Korea ended. However HMS Cardigan Bay was retained for occasional UN duty on the west coast of Korea into 1955, also taking part in joint exercises with the United States Navy. She spent the rest of the time deployed at Hong Kong and Singapore, patrolling off Malaya, Borneo and Indonesia. She also took part in various joint exercises with the Royal Thai Navy, Indian Navy Royal Australian Navy, Royal New Zealand Navy, and multi-national exercises with SEATO. In early 1958 she visited New Zealand, calling at Wellington and ports in South Island before resuming service with the Fleet at Singapore and Hong Kong, where she remained until November 1960.

HMS Cardigan Bay then sailed for Australia, calling at Townsville, Queensland, then Nouméa, New Caledonia, Suva, Fiji and Apia, Samoa before refuelling at Pearl Harbor on 9 January 1961. She then sailed for San Francisco, and called at San Diego, Manzanillo, Mexico, and Puntarenas, Costa Rica before transiting the Panama Canal on 23 February. She then called at Cartagena, Colombia, Maracaibo, Venezula, Port of Spain, Trinidad and Bermuda before finally arriving back at Plymouth on 7 April to decommission.

HMS Cardigan Bay was placed into Reserve on 30 May 1961, and was put on the Disposal List in 1962. She was sold to the British Iron & Steel Corporation (BISCO) for breaking-up by West of Scotland Shipbreaking Company at Troon, South Ayrshire, where she arrived in tow on 16th March 1962.