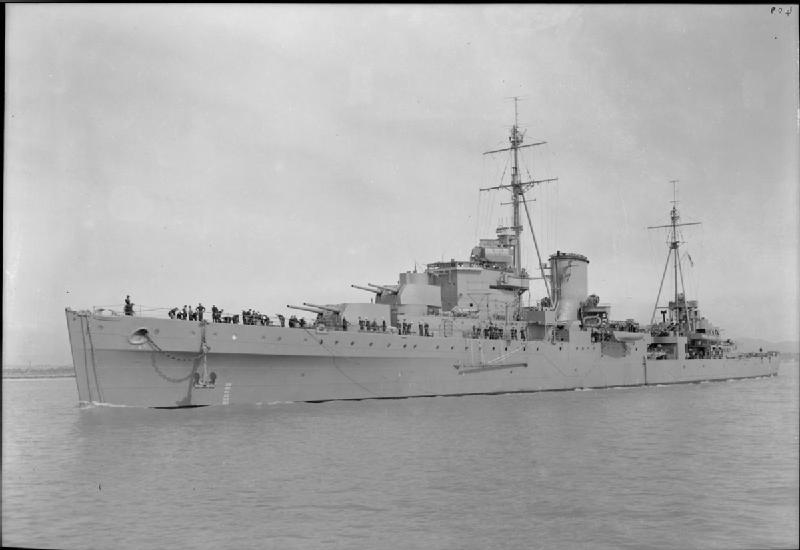 Only HMS Jervis and HMS Nubian, who served in the Mediterranean with HMS Orion matched this record.

it was exceeded by HMS Warspite, the Mediterranean Fleet flagship, which saw service in both World Wars

She was built by Devonport Dockyard (Plymouth, U.K) and Vickers-Armstrong (Newcastle-on-Tyne, UK)

Orion was commissioned on 18 January 1934, for service with the Home Fleet but she was transferred to the North America and West Indies Station in 1937 where she was with the 8th Cruiser Squadron. The cruiser conveyed the ashes of Lord Tweedsmuir, Governor-General of Canada, back to England in February 1940.

In June 1940 she was transferred to the Mediterranean, where she was with the 7th Cruiser Squadron as John Tovey's flagship. She took part in the bombardment of Bardia, and the Battle of Calabria in July 1940. During the rest of 1940 she escorted Malta convoys and transported troops to Greece. In the early part of 1941 she was in the Crete and Aegean areas and was also at the Battle of Cape Matapan in March 1941.

On 29 May 1941, during the evacuation of Crete, she was bombed and badly damaged while transporting 1900 evacuated troops. Around 360 lives were lost, of whom 100 were soldiers. After extensive damage control had been undertaken she limped to Alexandria at 12 knots, providing a spectacular sight in the harbour with the mast wedged into the ship’s funnel and significant battle damage. On 29 June Orion sailed for passage to Simonstown, South Africa via Aden for temporary repairs and then sent to Mare Island Naval Shipyard in the United States for major repairs.

Orion's repairs were completed in March 1942 and she returned initially to Plymouth where new radar was installed. During mid 1942, she was widely employed, in home waters and on convoy escort duties to Africa and the Indian Ocean.

Orion returned to the Mediterranean in October 1942. This time she was with the 15th Cruiser Squadron. She was involved in convoy escort duties and supported the army in the invasion of Sicily. She spent most of the rest of the war around the Mediterranean. She also took part in the Normandy Landings in June 1944, where she reputedly fired the first shell.

Orion ended service in 1947, was sold for scrap to Arnott Young (Dalmuir, Scotland) and arrived at the West of Scotland Shipbreaking Company's Troon facilitiy on 15th July 1949.