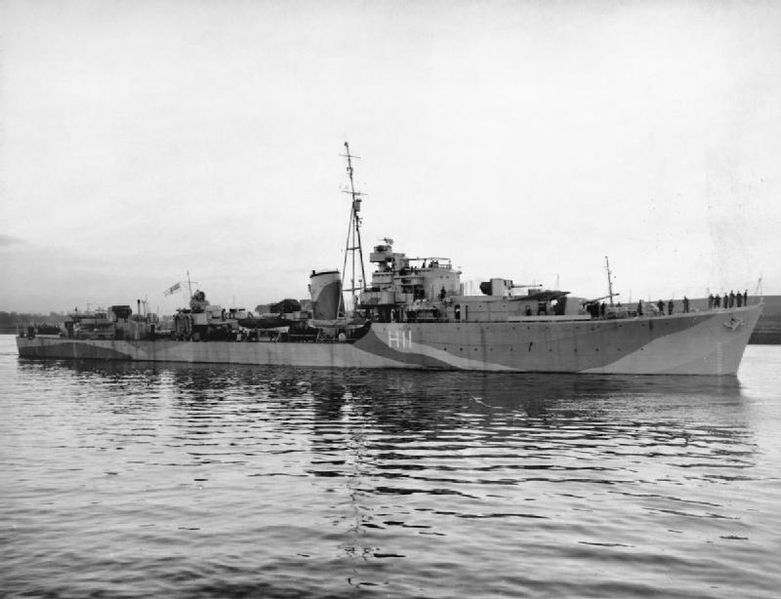 R-Class Fleet Destroyer ordered with 4th Emergency Flotilla from John Brown, Clydebank in April 1940. Construction work was delayed until September because of priority for repair work in ships damaged earlier that year in Norway and at Dunkirk. The ship was launched on 1st June 1942 as the 11th RN ship to carry the name which was introduced in 1757 and last used by a pre WW1 destroyer sold in 1920. Build was completed in November 1942. After a successful WARSHIP WEEK for National Savings in March 1942 she had been 'adopted' by the civil community of Hackney, Greater London.

Acceptance Trials and commissioned for service in 18th Destroyer Flotilla

Worked up with Home Fleet at Scapa Flow.

Detached to escort HM Aircraft Carrier VICTORIOUS with HM Destroyers QUICKMATCH and REDOUBT for Atlantic passage to join US Fleet in Pacific.

Detached from HMS VICTORIOUS after stormy passage in Atlantic during which damage was sustained to structure including boats. On completion of repair at Newport News US Navy Yard took passage to join a Tanker convoy as part of escort during passage to Gibraltar.

Nominated for service in Indian Ocean with Flotilla as part of Eastern Fleet.

Deployed in Atlantic for convoy defence.

Detached from WS26 with Ocean Escort on arrival at Freetown.

Detached from WS26 in Indian Ocean after ships from Capetown joined convoy.

Deployed for convoy defence in Indian Ocean and South Atlantic.

Detached from WS27 on arrival off Capetown.

Passage from Capetown to join military convoy WS28 in Atlantic.

Joined WS28 during passage from Freetown to Capetown with HM Destroyer RELENTLESS as relief for HM Destroyers QUADRANT and REDOUBT in Ocean Escort.

Detached from WS28 on arrival at Capetown and relieved by HM Destroyers QUADRANT, REDOUBT and RELENTLESS as Ocean Escort during passage to Durban

Detached from WS29 with HMS RELENTLESS an arrival at Capetown.

Rejoined WS29 with HMS RELENTLESS and HMS ROTHERHAM as Ocean Escort for passage to Durban.

Detached from WS29 and returned to Durban.

Deployed with M Destroyers NIZAM and RELENTLESS as screen for HM Cruisers SUFFOLK and NEWCASTLE during search for German tanker CHARLOTTE SCHLIEMANN  known to be in use for replenishment of U-Boats operating In the Indian Ocean.

Search abandoned after no interception or sighting by CATALINA aircraft or ships.

Nominated for transfer to Trincomalee.

Deployed at Trincomalee for screening of major units and convoy defence.

Deployed with Flotilla in India for convoy defence patrol and the interception of enemy supply ships and blockade runners.

Returned with RN and USN ships to Trincomalee.

Deployed with Eastern Fleet as part of Force 69 for a diversionary operation off Sumatra and the Nicobar-Andaman area during allied operations in New Guinea.

Deployed with screen for Force 70 during air attacks on Sabang and airfield at Lho Nga.

Three Japanese torpedo aircraft were destroyed in an attempt to approach allied units after the air operations.

Replenished in Exmouth Bay, NW Australia from Force 67 (This comprised Six tankers and a Distilling ship escorted from Ceylon by HM Cruisers LONDON and SUFFOLK.)

Air attacks carried out on oil refineries and harbour installations.

USS SARATOGA and US destroyers from TF66 detached.

Returned to Ceylon after refuelling in Exmouth Bay.

Carried out hunt with HMS RAIDER for 1537. (This submarine was on passage from Penang having delivered torpedoes and carried out an attack on a tanker which failed. This hunt lasted several days but unsuccessful.)

Fleet duties with Flotilla in continuation.

Planned strikes against airfields cancelled due to weather conditions.

Air strikes carried out on targets at Sigli, Sumatra.

On completion returned with Fleet units to Trincomalee.

Fleet deployment with Flotilla in continuation.

Eastern Fleet screen and patrol duties with Flotilla in continuation.  (Ships of Flotilla went to Simonstown for refit and R & R prior to planned operations by newly identified East Indies Fleet in support of landings in Burma and Malaya.

Deployed with HM Destroyers ROTHERHAM, REDOUBT and ROCKET for shipping sweep off Burma coast between Mergui and Amherst and for investigation of possible use of Narcondan Island as a base for MTB's.

Returned to Akyab to refuel.

Commenced operation to intercept craft between Rangoon and Tenasserim coast.

Intercepted convoy evacuating troops from Rangoon and destroyed all 11 ships.

Deployed as screen for HM Cruiser NIGERIA with HMS REDOUBT and HMS ROEBUCK as Task Force 62 to reinforce Eastern Fleet during operation to intercept warships which were covering evacuation of Andamans and Nicobars.

Fleet duties with Flotilla in continuation.

Mine clearance commenced  (HM Minesweeper SQUIRREL badly damaged by mine. seven of ship's company were killed. Minesweeper had to be sunk after taking on heavy list.

Under attack by Japanese suicide dive-bombers.

HM Minesweeper VESTAL was hit and badly damaged by fire. Eleven of snip's company killed.  Sank HMS VESTAL by gunfire. On completion of clearance operation returned to Trincomalee. This was the last offensive operation by ships of the Eastern Fleet).

Deployed with Fleet at Trincomalee and prepared for Malaya landings.

Deployed with Eastern Fleet for screening duties during passage to Padang.

Part of covering force during landings in Malaya.

Deployed with Eastern Fleet ships at Singapore for Japanese surrender.

HMS RACEHORSE returned to UK after the occupation of Singapore and was reduced to Reserve status at Portsmouth. Laid up at Portsmouth she was selected for use as a ship target in trials at Gareloch. On completion in 1949 the ship was placed on the Disposal List and sold to The West of Scotland Shipbreakers on 9th November 1949. The ship arrived in tow at Troon for demolition In on 8th December that year.