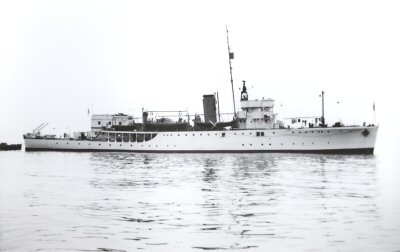 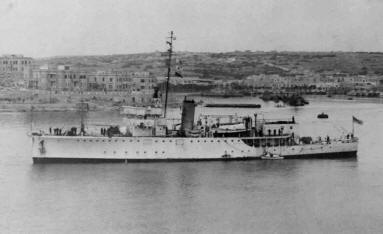 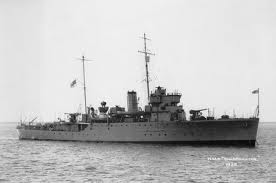 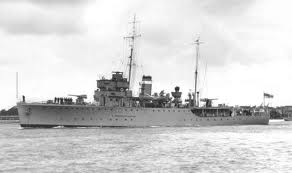 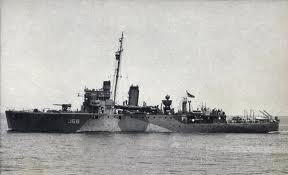 From April to July 1938 she operated in the Channel and visited south coast ports, she then accompanied the Flotilla on its visit to Fredrikstadt (Oslo Fjord). On 9 September the ships of the Flotilla were brought up to full complement, and for two months they were at their war Station (Scapa Flow) and off the east Scottish coast. (This was the period of the 'Czech Crisis' when the Prime Minister visited Germany and played for time).

By the year's end SHARPSHOOTER was at Sheerness. Flotilla was to be at one week's notice for operations, but should otherwise be available to the CinC Western Approaches for escort duty.

Between 6 August and 10 November she was 'arcticised' and sailed to Archangel with PQ5 where she carried out local duties in North Russian waters in December 1941 and January 1942.  These included A/S patrols and escorting incoming convoys and of course she looked for mines.

SHARPSHOOTER sailed with the homeward-bound QP9 (19 ships) which left Murmansk on 21 March 1942.

On 24 March SHARPSHOOTER rammed and sank U655, the first U Boat to be sunk during a Russian Convoy. SHARPSHOOTER was damaged and proceeded ahead of the convoy for repairs.

In September 1942 she sailed with PQ18.  During the passage of this convoy, the enemy lost three U-boats and about 40 aircraft but managed to sink 13 merchant ships.  The survivors of the convoy reached Archangel on 17 September.  SHARPSHOOTER remained there until November when she returned with QP15 and was damaged in a collision with a merchant ship at Iceland. On 30 May 1943 SHARPSHOOTER escorted KMS15 (74 ships) which was one of the preliminary convoys for the planned amphibious landing on Sicily (Operation 'Husky').

Detaching three ships at Gibraltar, this convoy entered the Mediterranean with Convoy UGS8A (58 ships). The combined convoy of 129 ships was the largest of the war up to that time, covering 68 square miles of sea, and screened by 19 escorts.

SHARPSHOOTER took part in the invasion of Sicily in July 1943. SHARPSHOOTER then led a busy life minesweeping in and off Mediterranean ports from Malta, Italy and the eastern Med, and they also worked as convoy escorts.

SHARPSHOOTER then joined the 49th Escort Group. From 18 February 1944 to the third week in September she escorted Mediterranean convoys. On 5 April while temporarily with MKS44, she was damaged by the explosion of a 'Gnat' (German acoustic torpedo).  She refitted at Haifa 10 May to 16 June and then escorted several more convoys.

SHARPSHOOTER returned for a refit at Chatham in October 1944. On 16th November she sailed up to Lowestoft for a further month's refit, after which she became a seagoing training ship for engineering personnel.

In mid May 1945 SHARPSHOOTER was converted into a survey ship.In April 1946 she sailed to relieve CHALLENGER who was engaged on Hydrographic survey duty on the China coast.  As she sailed east she performed a small survey in the Aden area and continued on to Trincomalee via Bombay. On 10 July she departed Trincomalee and carried out a short survey in the Mergui Archipelago (S. Burma coast). On 25 July she sailed for Penang to locate wrecks in the southern approaches to the port. By 3 August she was at Singapore from whence she departed on the 24th for a month's survey on the Malayan east coast. She then had a short stay at Singapore before sailing for a variety of survey duties to occupy her commission.

When SHARPSHOOTER completed her Far East survey duties she returned to the UK in 1948 for Home Waters surveying. On 1 July 1953, she was renamed SHACKLETON – a more appropriate name for a survey ship. It was not until late 1962 that SHACKLETON paid off into Reserve at Devonport (9 November 1962).

She remained in Reserve until 3 November 1965 when she was sold to the West of Scotland Ship Breaking Company, and on 21st November 1965 she arrived at Troon for break-up.