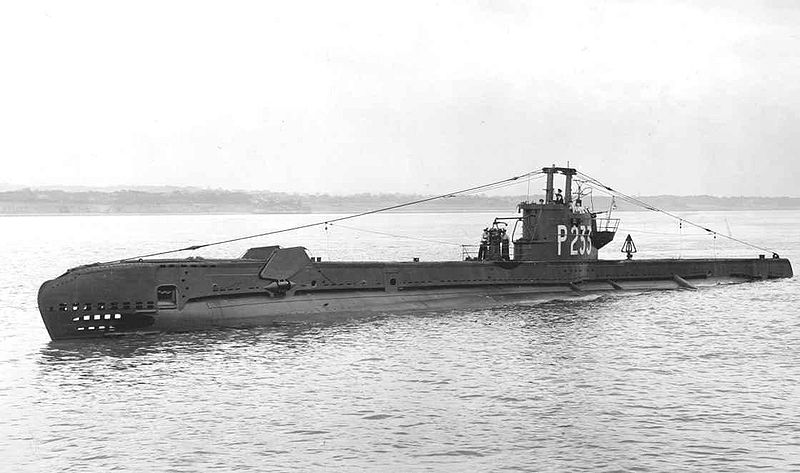 'S'-Class Submarine for the Royal Navy

After sea trials and working up in Holy Loch and Scapa Flow, Storm's first (and uneventful) patrol was to the Norwegian coast, north of the Arctic Circle. The day after Boxing Day 1943 she departed Holy Loch for the long passage to Ceylon (modern Sri Lanka) via Gibraltar and the Suez Canal, arriving in Trincomalee on 20 February 1944.

Her first patrol in the Far East was to the Malacca Straits between Malaya and Sumatra, both then occupied by the Japanese. On 11 March 1944 she sank her first victim, a 500 ton coaster, with gunfire. In April she patrolled to the Andaman Islands in the Bay of Bengal south of Rangoon and on 14 April made her first sinking by torpedo, a 3,500 ton merchant vessel. The following day Storm attacked a merchant ship with a destroyer escort, sinking the latter and damaging the former with torpedoes.

Storm's third patrol was a so-called "cloak-and-dagger" operation, to land a local agent on an island off the northern tip of Sumatra. This ended in failure when men in an inflatable dinghy sent out to retrieve the agent from the island heard him calling from the shore at night. His voice was coming from the wrong location, and sounded strained, the dinghy retreated and Japanese machine guns opened up. The dinghy occupants made it safely back to the submarine, but the fate of the agent was unknown. The fourth patrol was back to the Malacca Straits and a third victim was sunk by torpedo; this time a Japanese submarine-chaser. A subsequent patrol led to the taking of Japanese prisoners who were brought back to Trincomalee, the first such captures of the war.

In September 1944 Storm was deployed to Fremantle in Western Australia. The distance to the cruising grounds around Java and Celebes were so great that one of her ballast tanks was converted to carry diesel fuel in order to manage the 4,800 mile round trip.

In November several schooners and other small craft carrying nickel ore were sunk.

In January 1945 Storm briefly held the record – 37 days – for a patrol by an S-class boat, covering 7,151 miles in the process. However this was her last patrol, and she received orders to return home. She finally did so on 8 April 1945, flying the traditional Jolly Roger flag to signify the end of a successful patrol. Since leaving her builders she had travelled 71,000 miles and spent over 1,400 hours under water – the equivalent of 60 days and nights.

20 Jun 1944
HMS Storm (T/A/Lt.Cdr. E.P. Young, DSC, RNVR) attacked German U-boat U-1062 with torpedoes in the Malacca Strait. The torpedoes however missed their target. The U-boat had left Penang the previous day.