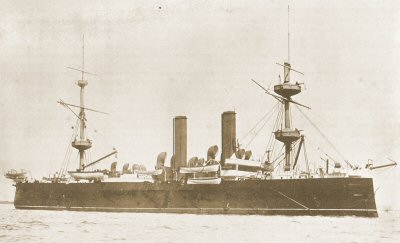 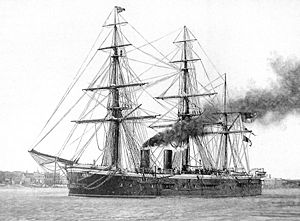 Built as a Broadside Ironclad Battleship, 2nd Class, for the Royal Navy by Chatham Dockyard, this large armoured ship, of iron construction, gave no less than 76 years service.

She also had a 1-shaft Penn Steam Trunk Engine that developed 7,720 IHP

Under sail she could achieve 6 knots

Under steam power she could achieve 14.1 knots

then placed in Reserve until 1882 when she was retuired to the Mediterranean once more.

On 6th March 1889, she struck an unchartered rock in the Comino Channel, off Malta, and sank.  She was eventuially raised by an Italian salvage Firm and, after repairs in Malta, was towed back to Portsmouth.

Although refitted and modernised between 1893 – 1896, her obsolescent muzzle-loading guns were retained, which rendered her useless as a fighting ship by that time.  Nevertheless she was retained in Reserve until 1906 when stricken.

After various service periods as a Training Ship and Repair Ship, she served throughout WWII as a Depot Ship for Minesweepers operating out of Portsmouth.

On 13–08-1946, after 76 years service, the old ironclad was sold for breaking and arrived at Dalmuir on the Clyde for this purpose on 08-10-1946.  By May 1947, she had been reduced to a hulk and was delivered to the West of Scotland Shipbreaking Company at Troon for finishing off.