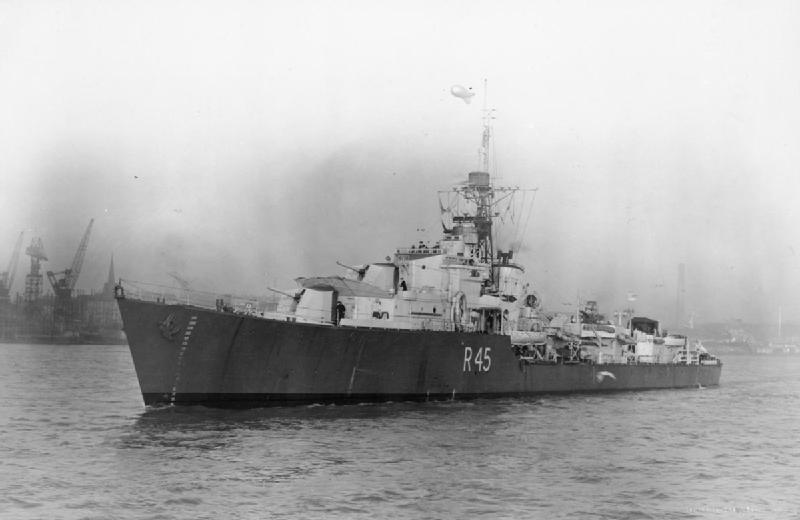 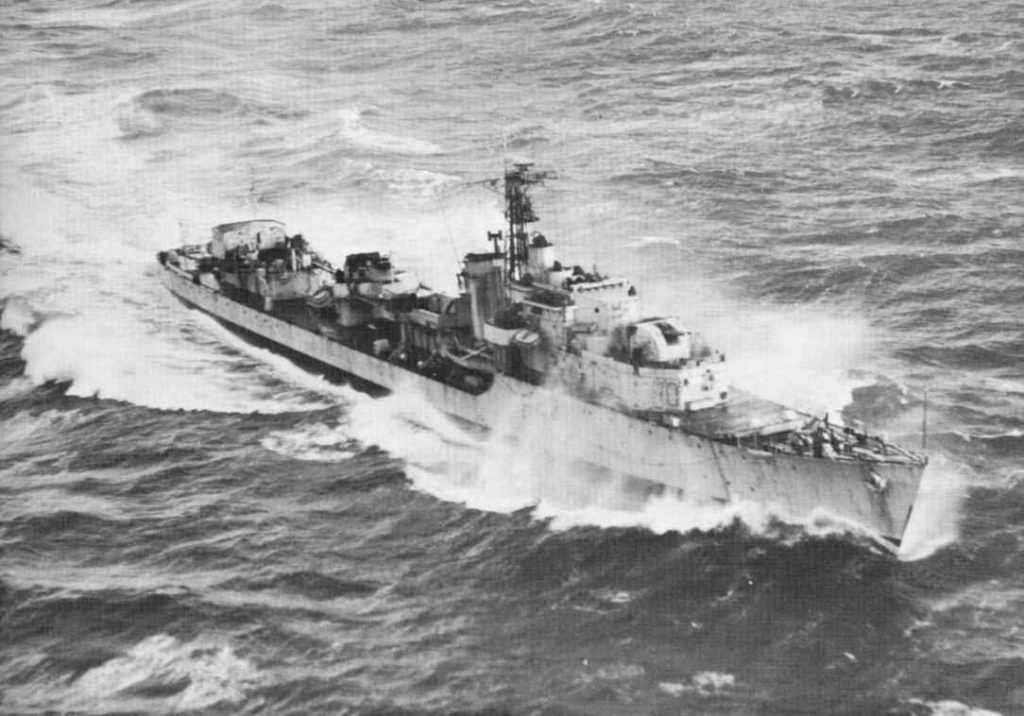 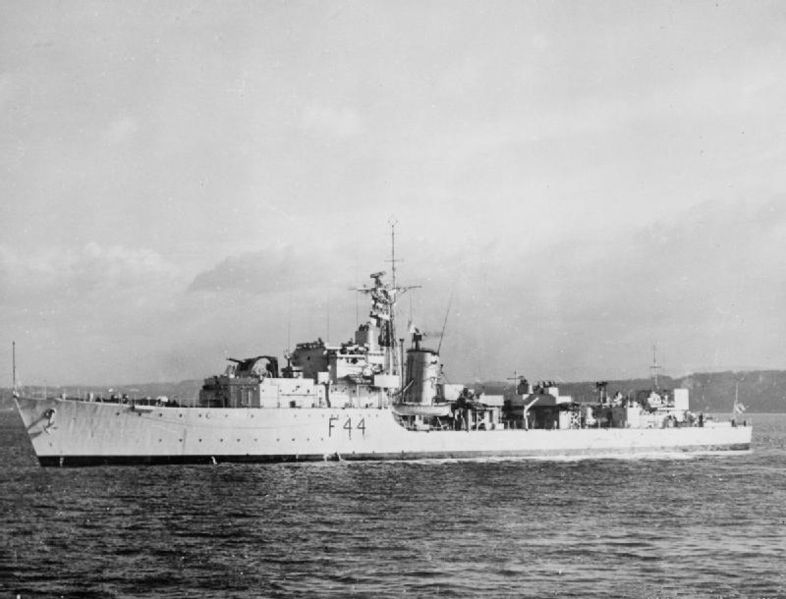 Ordered in March 1941 as HMS TEMPEST but launched as HMS TENACIOUS  (Pennant No. R 45)

Armament (as a Destoyer)  :

On completion of trials took passage to Scapa Flow for work-up. Worked up with Home Fleet at Scapa Flow.

Prepared for foreign service and took passage for Gibraltar.

Deployed with Flotilla in Western Mediterranean.

Joined other units of HM Navy in Operation Shingle

Under heavy air attacks including use of Glider Bombs

Bombarded Recanti and Pedaso, south of Ancona, with HMS TUMULT

Deployed in Central Mediterranean for convoy defence and patrol.

After establishing contact with a submarine carried out depth charge attacks.

Remained in area to await inevitable surfacing of submarine.

Engaged U-453 with surface gunfire when that submarine surfaced.

Mediterranean deployment with Flotilla in continuation

Nominated for duty in support of allied landings in South of France under overall US Navy command.

Deployed with others as Task Group 88.1.

Sailed from Malta for assault area with TG 88.1.

Released from DRAGOON and took passage with TG88.1 for Alexandria.

Nominated for deployment with Flotilla in British Pacific Fleet after refit.

Under refit in Malta and prepared for new service.  On completion took passage to Sydney.

On passage to Australia.

Deployed with HMS TERMAGANT in TF57.

Part of screen for capital vessels during air operations against Sakishima Gunto Group of islands.

Detached as escort for HM Battleship KGV during passage to Guam for meetings with US Naval Staff.

Transferred with ships of BPF to 3rd US Fleet and redesignated as part of Task Force 37.

Passage from Guam to rejoin ships of BPF at Manus.

On arrival nominated for service with ships of Flotilla for RN operation.

Detached from Task Group 112.2 as screen for capital ships during air attacks on Truk

Rejoined ships of Task Force 112.2 to carry out bombardment of seaplane base on island of Dublon.

Rejoined Task Group on completion for screening and cover during air attacks by carrier aircraft.

Took passage to Manus at daybreak with ships of Task Group.

Task Force 37 joined ships of US Task Force 38 for air operations against Japan.

Deployed as screen for HM Aircraft during combined attacks.

Screening duties in continuation during attacks on subsidiary targets.

Detached with others for screening during bombardment of shore targets as Task Unit 37.1.8

Bombarded Kamaisha, Honshu, Japan with spotting aircraft from US battleships.

Retained in operational area as part of US Task Force 38.

Deployed as screen for during joint attacks by carriers and bombardments of targets in Tokyo area.

Refuelled with ships of Task Group 38.5 from US tankers.

HMS TENACIOUS remained with the British Pacific Fleet for support of the military occupation and the repatriation of allied nationals from captivity. In addition the ship carried out Fleet duties. After a visit to Melbourne in February with HMS TUMULT and HMS UNDINE, she returned to UK and paid off into the Reserve Fleet at Devonport. Re-commissioned in 1949 after a refit this destroyer served in the Clyde as Target Ship for the 3rd Submarine Flotilla. In 1951 she was selected for conversion to a Type 16 Anti-Submarine Frigate at Rosyth. After completion in 1954 she again went into Reserve until placed on the Disposal List. Sold to BISCO she was first de-equipped at Devonport and arrived at Troon for breaking-up in June 1965.