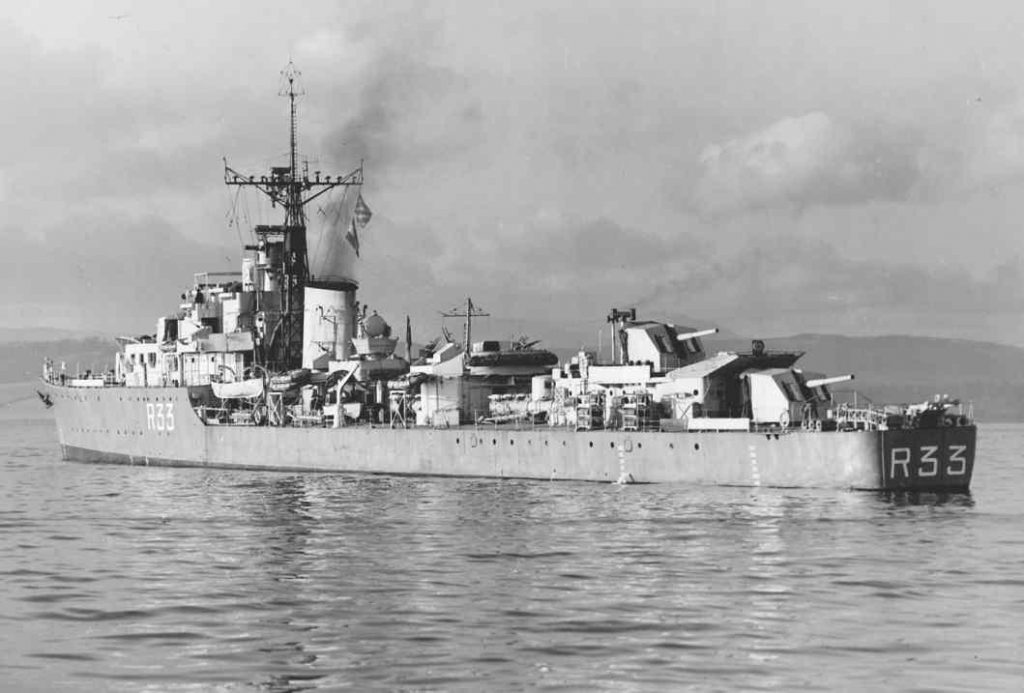 Joined 24th Destroyer Flotilla in the Home Fleet on completion of work-up.

02-1944  :   Transferred with Flotilla for support duties in Mediterranean.

06 1944  :   Deployed on escort and support of military operations in Adriatic and central Mediterranean

07-1944  :  Nominated for duty with ALPHA Gunfire Support Group during allied landings in the South of

Carried out preparation for support role.

08-1944  :  Joined with others in Malta forming Gunfire Support Group ALPHA.

Released from bombardment duties but remained in assault area.

Released from DRAGOON duty with HMS TERMAGANT and USS QUINCY

Reverted to control by C-in-C Mediterranean.

09-1944  :  Deployed on support and escort duty in Eastern Mediterranean.

Took part in sinking of U407

Transferred to British Aegean Force with ships of 24th Flotilla

Took part in occupation of Scarpanto with HM Destroyer CLEVELAND.

Nominated for duty with British Pacific Fleet after UK refit.

12-1944 :  Passage to Plymouth for refit in HM Dockyard, Devonport.  Taken in hand for refit

02-1945 : Under refit and preparation for service in Pacific.

04-1945 : Exercised in Mediterranean prior to onward passage to Sydney.

05-1945 : Deployed in Australian waters in preparation for service with US Navy.

(Note: RN Ships deployed with US 5th Fleet as Task Force 57 had had returne to Manus in late May after completion of attacks on Sakashima Gunto with US Task Forces. They then went to Sydney, Australia.

Joined Task Force 37 on arrival at Manus from R&R.

Sailed from Manus to join US Task Groups In operational area off Japan.

Deployed with screen for HMS KING GEORGE V, Carriers and Cruisers of BPF

After further air operations by BPF carriers withdrew with screen to replenish.

During passage with screen, destroyers were refuelled from cruiser in order to ensure full availability

After withdrawal to replenish came under air attacks.

Returned with screen for BPF to rejoin US Task Groups in operational area.

Deployed for screening during passage of Task Force 37 ships or replenishment.

Replenishment transferred to new area because of swell conditions.

Passage with screen for BPF ships to renew operations.

Took part in bombardment of shore targets at Kamaisha, Honshu during main attack

(Decision to extend operational period was made following the entry of USSR into war with Japan.)

Transferred to US Task Force 38 for deployment in Task Group 38.5.

(Note: During Replenishment period agreement with US Navy was made for fuel to be provided for Token Force of RN ships required to take part in surface ship bombardments and air attacks in Tokyo area.

Deployed with screen for TG38.5 during air attacks in Tokyo area.

Screening duties continued for passage to operation area after refuelling with US warships of Task Force 38.

Deployed with reformed Task Force 37 and anchored in Sagami Bay.

HMS TERPSICHORE was deployed for the support of repatriation of allied personnel from Japan and attended the final surrender of Japan with reformed Task Force 37 in Tokyo Bay on 2nd September. On release from service with the British Pacific Fleet the ship returned to UK in 1946. She was placed in Reserve and laid up at Devonport. In 1953 this ship was converted for use as a Type 16 Anti-submarine Frigate by her builders at Wololston. After completion and trials in her new role in 1954 she was replaced in Reserve at Devonport. Refitted during 1958.and in 1960 laid-up at Lisahally, Northern Ireland. This destroyer was placed on the Disposal List in 1964 and sold to BISCO for demolition by West of Scotland Shipbreakers. She arrived at the Breaker's yard in Troon, Ayrshire under tow on 17th May 1966.