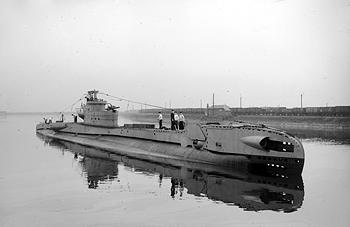 Apart from a brief period in home waters off the Scandinavian coast, Terrapin served in the Far East for much of her wartime career. She had a comparatively active career, since she was only commissioned on 22 January 1944.

In March 1944 she attacked a German convoy off Egersund, Norway, torpedoing and damaging the German katapult ship Schwabenland, and the German tanker Wörth, (the former Dutch Omala).  The Schwabenland was grounded to prevent her from sinking and the Wörth was towed to port.

Terrapin was then assigned to the Pacific Far East in mid 1944. She opened her career by bombarding Japanese installations at Gunung Sitoli (Nias Island), Western Sumatra. She also sank a Japanese coaster with gunfire and damaged another. She went on to sink the Japanese auxiliary netlayer, Kumano Maru, the Japanese minesweeper W 5, and ten Japanese sailing vessels, damaging another.

Terrapin often operated with her sister, HMS Trenchant and together they sank the Japanese tanker Yaei Maru No.6, the Japanese auxiliary minesweeper Reisui Maru, the Japanese submarine chaser Ch 8, a fishing vessel and seven coasters. Terrapin herself sank another small craft with gunfire.

She was damaged on 19 May 1945 by depth charges from Japanese escort vessels while attacking an escorted tanker West of Batavia, Java in the Java Sea. She escaped and returned to Fremantle, Australia. She was declared a constructive total loss on return to harbour, and was scrapped in April 1946 at the West of Scotland Shipbreaking Company of Troon.