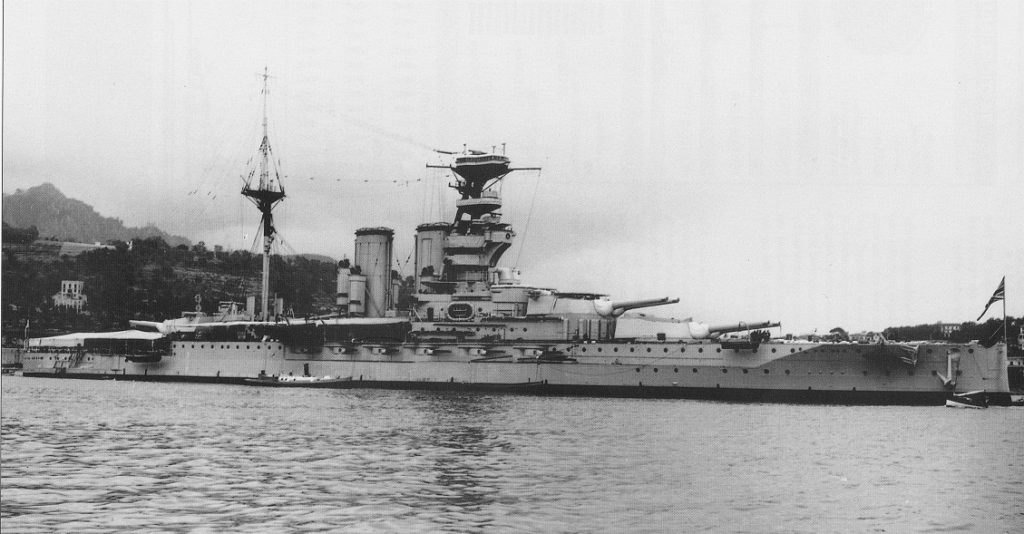 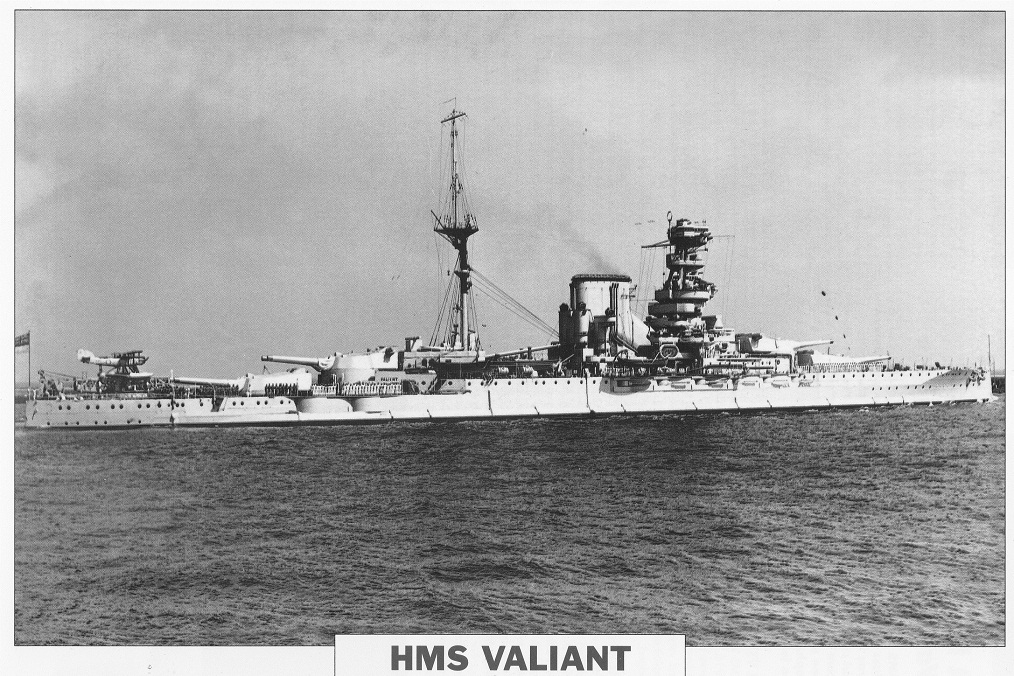 Joined the 5th battle Squadron at Scapa Flow on 3rd March 1916 to serve beside her sister-ships of the same Class (Queen Elizabeth, Warspite, Barham and Malaya)  She was then Involved in the Battle of Jutland in the summer of 1916.

HMS VALIANT BETWEEN THE WARS

Comprehensive modifications to the vessel, both hull and superstructure, and her armaments were carried out during these years.  She was re-commissioned in 1939.

1931  :   The crew of HMS Valiant participated in what became known as The Invergordon Mutiny.  This was effectively industrial action by about 1,000 sailors of the British Atlantic Fleet by way of protest against severe pay-cuts imposed by the Government and Admiralty at short notice.  On 15th and 16th of September 1931 several ships of the Fleet at Invergordon were in open mutiny – this first such action in the history of the Navy.

On 21 April 1941, under the command of Admiral Cunningham, HMS Valiant along with battleships Barham and Warspite, as well as the cruiser Gloucester and various destroyers, attacked Tripoli harbour.

She was one of three capital ships to take part in the destruction of the French Fleet at Mers-el-Kebir  and saw action at the Battle of Matapan; she participated in actions during the Battle of Crete, and was struck by two bombs.

Along with her sister ship, Queen Elizabeth, Valiant was mined and seriously damaged by Italian human torpedos in Alexandria Harbour in December 1941.  Durand de la Penne was the frogman who placed the limpet mine on the Valiant.  Being captured along with all other frogmen, he refused to inform the ship's captain of the mines until a few minutes of their detonation, to allow the British to evacuate.

As one of the magnetic mines had detached prior to exploding, her condition was far less critical than Queen Elizabeth.  Despite having a heavy trim forward the decks were above water, and she remained clear of the harbour bottom.  Although nearly immobilised she was able to give the impression of full battle readiness, a subterfuge exploited by the Royal Navy who allowed photographs of the seemingly undamaged ship to appear in the British press.  She was repaired in Durban, South Africa, then returned to the Mediterranean to support the landings in Sicily (Operation Husky) and at Salerno (Operation Avalanche) in 1943.

She was sent to the Far East in 1944 as part of the Eastern Fleet, taking part in raids against Japanese bases in Indonesia.  On 8 August 1944 whilst in the floating drydock at Trincomalee, Ceylon, she was severely damaged when the dock collapsed. The two inner screws were jammed as well as one of her rudders. Floating drydocks and the ships that they hold are raised through increased buoyancy gained when sea-water ballast is pumped out of ballast tanks. In Valiant's case, the sequence in which tanks were being emptied was inappropriate for the ship's weight distribution which was exacerbated by a full munitions load. As a result, the drydock was over-stressed at its ends, broke its back and sank. Valiant had remained in steam and was able to avoid worse damage or sinking.  (After the incident, the responsible Naval Constructor was disciplined)

It was decided to sail her to Alexandria where there were suitable docking facilities, however she could not steer a straight course, and could not make more than 8 knots (15 km/h). She got as far as Suez Bay, but could not attempt the canal in that condition. Lt .Cmdr. Peter Keeble, an experienced diver and salvage expert, personally supervised the removal of her two inner screw shafts near the gland. The A-brackets holding the shafts and screws were also cut, dropping both screws and shafts to the bottom. Keeble had perfected available underwater cutting torches by combining British and Italian technology to enable the thick propeller shafts to be cut away. She returned to the UK and was decommissioned in July 1945.