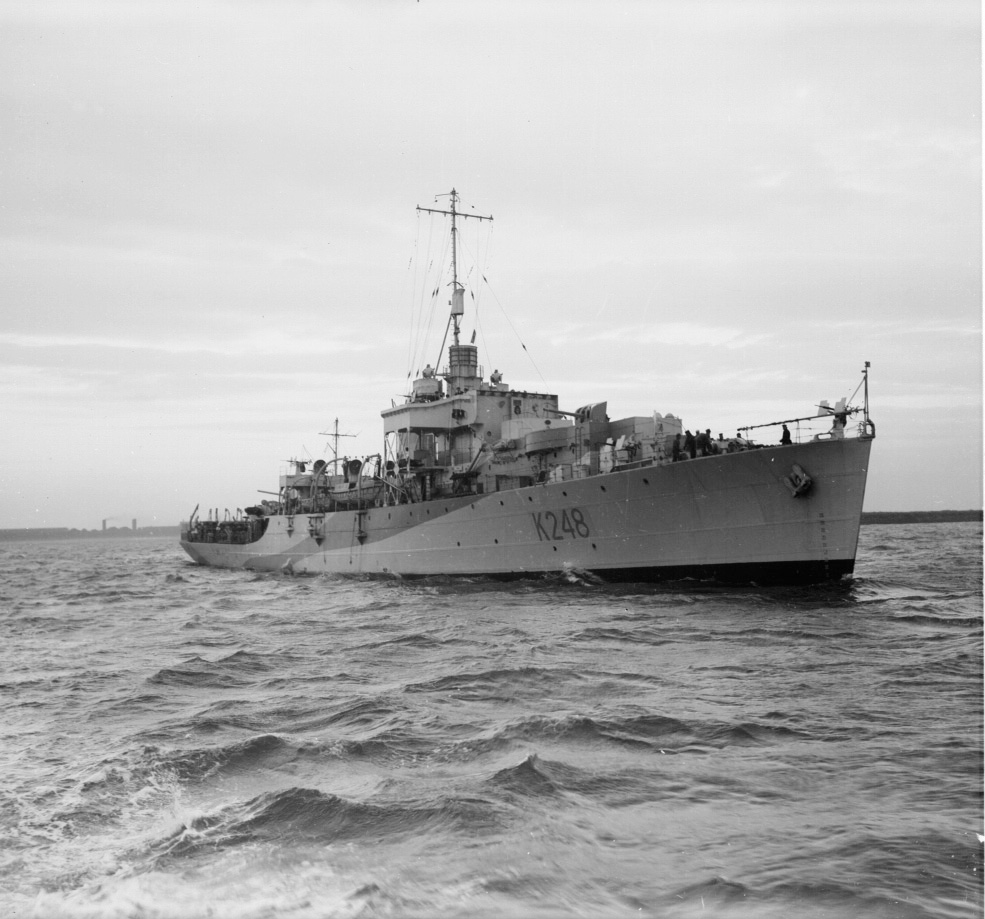 Events in the war career of HMS Waveney

On the 23th August 1943 the 40th Escort Group, consisting of the sloops HMS Landguard, HMS Bideford, HMS Hastings and the frigates HMS Exe, HMS Moyola and HMS Waveney were deployed on a U-boat hunt off Cape Ortegal. The whole operation was covered by the British light cruiser HMS Bermuda.

The Canadian 5th Support Group (Cdr. Tweed), consisting of the British frigates HMS Nene, HMS Tweed and the Canadian corvettes HMCS Calgary, HMCS Edmundston and HMCS Snowberry were deployed to relieve the 40th Escort Group. While this was in progress the ships were attacked by 14 Dornier Do-217's and 7 Ju-88's with the new German weapon, the Henschel Glider Bombs, (the "Hs293 A-1"). Designed by the German Professor Herbert Wagner. HMS Landguard and HMS Bideford were the first of the Allied and R.N. ships to be attacked and damaged by them. This being the first time of their being brought into action against Allied ships. Several sailors were injured on HMS Bideford and one sailor were killed.

The Canadian 5th Support group was relieved by the 1st Support group (Cdr. Brewer) consisting of the sloops HMS Pelican, HMS Egret and the frigates HMS Jed, HMS Rother, HMS Spey and HMS Evenlode. Also the covering cruiser HMS Bermuda was relieved by the Canadian destroyer HMCS Athabaskan and the British destroyer HMS Grenville. These ships were also attacked by the Germans, this time with 18 Dornier Do-217s also carrying Henschel Glider Bombs. HMCS Athabaskan was heavily damaged and HMS Egret was sunk with the loss of 194 of her crew.

HMS WAVENEY remained at Saigon for some weeks before returning to Singapore. On release from East Indies Station she was nominated for Reduction to Reserve status. After arrival in UK the ship Paid-off and laid-up in the Reserve Fleet until placed on the Disposal Lost. She was sold during 1957 to BISCO for initial demolition by Arnott Young of Dalmuir, followed by final demolition by the West of Scotland Shipbreaking Company.