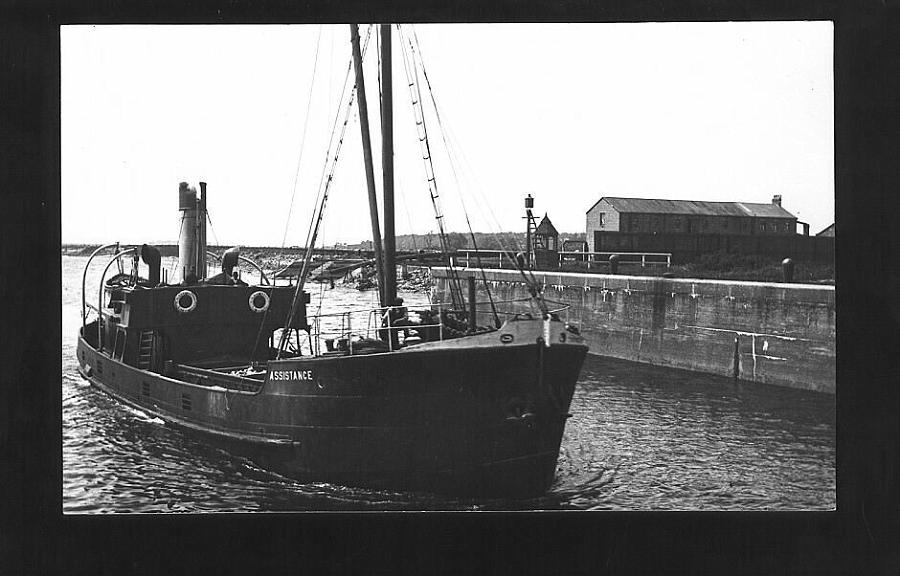 Built by Scott & Sons of Bowling, Yard No. 160, in 1903 as the 223 GRT coaster ‘Jennie’ for Messrs J. Monks. Compound steam engine by Fisher & Company of Paisley. Ownership changed four times before acquisition in 1940 by BISCO (British Iron and Steel Corporation [Salvage] Limited of Glasgow)

This little vessel was one of those assigned to assist in the salvage attempts of Liverpool’s T & J Harrison liner S.S. Politician (7,940 GRT) which went ashore off the East side of Calvay Island in the Sound of Eriskay in the early hours of 5th February 1941.  A fleet of small coasting vessels, including the Assistance, attended the large liner over a period of some months during which she was gradually lightered and much of her cargo transported back to the Clyde – Glasgow, Greenock, Troon.

Whilst the salvage effort was almost successful, the naval tug Marauder, that was going to carry out the tow was called away by the Admiralty at short notice to attend to another casualty and the recently (20th September 1941) refloated Politician was re-beached on the sandy shore to the North of Calvay Island to await a subsequent window of opportunity for the salvage job.

However, the opportunity did not present itself again and severe gales from the 8th through 10th of November caused sufficient additional damage to scupper any chance of a successful salvage.  In 1942, with her back broken, the salvors cut the ship in two and the forward half was towed to Kames Bay, Port Bannatyne, Isle of Bute, and beached, to be broken up in situ by W.H. Arnott Young & Company.

The Assistance, after a career of 48 years, arrived at the Troon ship-breaking facility (West of Scotland Ship-breaking Company Limited) on 20th February 1951 and breaking commenced on that same date and was completed on 3rd April 1951. Having landed literally hundreds of cases of the best quality malt whisky at Troon, destined for the Bonded Warehouses of Johnnie Walker in Kilmarnock, it was ironic that she should end her days a matter of a few hundred yards from where these very landings took place !