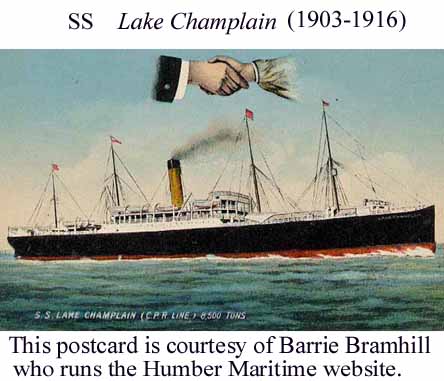 Launched on 31/3/1900, she sailed on 15/5/1900 from Liverpool on her maiden voyage to Quebec and Montreal. On 21/5/1901, she was the first merchant ship to be fitted with permanent wireless telegraphy apparatus and on 6/4/1903 was taken over, with the rest of Beaver Line's fleet, by Canadian Pacific.

On 4/2/1914 she left St John,NB for London and in Sep 1914 commenced her last London – Quebec – Montreal voyage.  Requisitioned by the Admiralty for use as a transport for the British Expeditionary Force and renamed REGINA

She arrived at Belfast in Nov 1914 and was converted into a dummy of the battleship HMS KING GEORGE V.  On completion, stationed at Loch Etive and later at Scapa Flow.

In summer 1915, stripped of camouflage, she became a store ship and was renamed RUTHENIA.  On 29th January 1915 she was bought outright by the Admiralty and in 1918 was fitted out with cylindrical tanks to carry 5,000 tons of oil and  used as a naval oiler.

In 1919 she sailed for the China Station and by 1929 was in use as an oil storage hulk at Singapore.

In February 1942 in the face of imminent Japanese invasion, she was scuttled, but was later salvaged by the Japanese, had her tankage removed, accommodation installed and put to use as a troopship by the Japanese un her new name – CHORAN MARU.

Recaptured by Allied forces in 1945, and used for the transportation of POWs, but she stranded in the Moesi River in 1946, was refloated and towed by the tug ENGLISHMAN to the Clyde.  Arriving there on 18/6/1949, she was part-broken up by Arnott Young at Dalmuir and completed by the West of Scotland Shipbreaking Company, Troon.