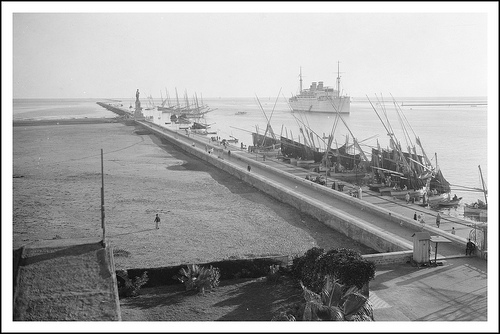 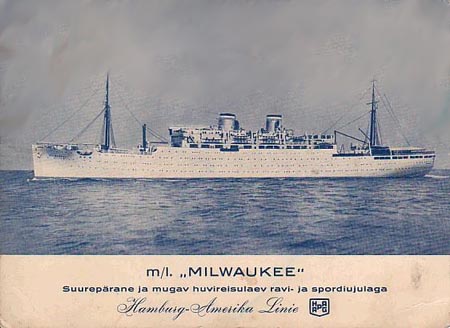 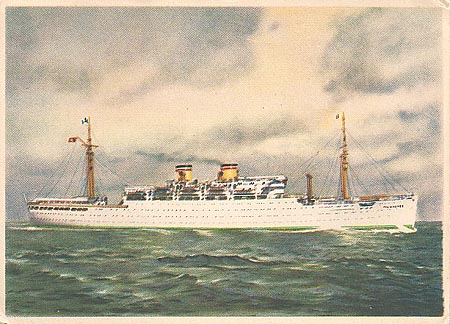 Launched as M.V. MILWAUKEE for the Hamburg Amerika Line

Towards the end of the War, the vessel, which had been taken over in 1940 by the Kriegsmarine for service as an Accommodation and Depot Ship at Kiel, was badly damaged by the RAF by bombing, to prevent the large vessel being used as a Nazi escape ship.  At the end of the war she was taken ober by the Amercians and returned to the USA for repair and fitting-out as an Amercian ship.  However, this plan was abandoned and she was acquired by the British Ministry of Transport in November 1945, renamed M.V. EMPIRE WAVENEY, and laid up at the Canada Dock, Liverpool, for repairs and conversion to be carried out by Harland & Wolff, under Managers Cunard White Star.

However, on 1st of March 1946, a fire broke out and the vessel was gutted and sunk as a result.

She was refloeated on 4th of May 1946 and drydocked.  The inspection and survey carried out determined the vessel was beyond economic repair and she was sunsequently declared a total loss.

On 26-01-1947, she departed Liverpool bound for Dalmuir on the Clude for breaking by Messrs Arnott Young.

On 25-09-1947, her hulk departed the Clyde bound for Troon for final demolition at the WSSCL facility at Troon.