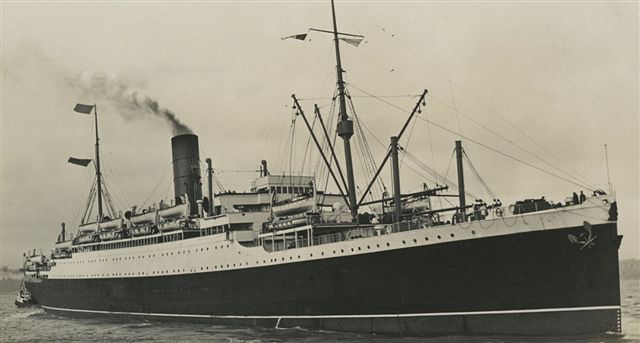 Launched as the S.S. ANTONIA for the Cunard White Star S. S. Company, she was renamed HMS WAYLAND for service as an AMC and then as a Repair Ship for the British Government.

Launched as the 15 knots twin-screw ANTONIA for the Cunard White Star S. S. Company Limited.  Maiden voyage took place on15th June 1922 when she sailed from London for Southampton-Quebec-Montreal. Thereafter, until 1940, she mainly sailed from European ports to the USA, mainly New York.

In October 1940, the liner was requisitioned by the Admiralty and converted for service as an Armed Merchant Cruiser, this work being completed in March 1941, at which time she was renamed HMS WAYLAND with the Pennant No. 137.

She continued in this service until 24th March 1942, at which time she was sold to the Admiralty for further conversion to a Repair Ship, with her deadweight tonnage increasing to 18,750 tons. This work was completed in 1944.

Sold in 1948 for scrapping, she arrived at Troon in February 1949 as detailed above.