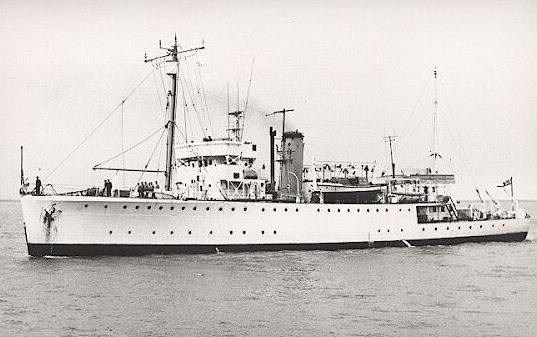 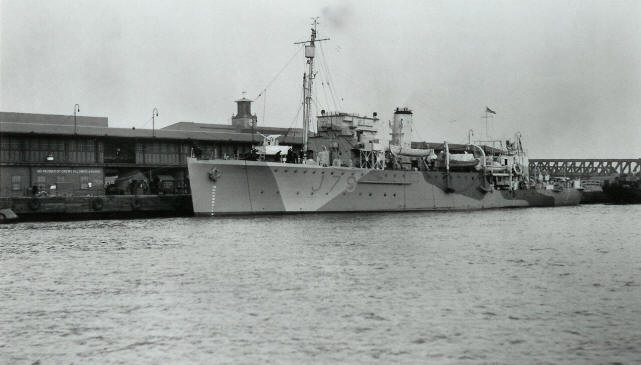 Up to the outbreak of war, HMS Scott was employed on survey work in connection with the proposal to lay a Channel Mine Barrage and, during the first few months of the war, she was employed in directing the minelayers in laying the Barrage.

In October/November 1939, HMS SCOTT was converted to an anti-submarine vessel. She kept the big chartroom aft, but lost her mainmasts to topweight compensation.

However in April/May1940, she was converted back to the role of survey vessel.  HMS SCOTT then carried out a number of important routine surveys in Home Waters. She spent much of the next two years employed on mining, providing precise positioning for the minelayers and, where necessary, carrying out surveys of the intended minefields before they were laid to determine the depth of water, and hence the length of mooring needed, as well as measuring the tidal streams and currents which the minelayers could expect to encounter.

She was principally engaged on the northern barrage, between Scotland, Iceland and Greenland. Only the week before the Bismarck's break‑out in May 1941 – HMS SCOTT was in the waters that the German squadron passed through, surveying for the next tranche of the barrage. As well as making the surveys to provide data before laying, HMS SCOTT also herself accompanied the minelaying sorties for the northern barrage.

In December 1941, she was the surveying ship for 'Operation Anklet' – the second raid on the Lofoten Islands. In this operation she surveyed and marked the narrow approach channel and the anchorage for use by the British Forces taking part. During the subsequent withdrawal HMS SCOTT collided with Arethusa, both ships sustaining slight damage (stem broken and twisted to port).  HMS SCOTT spent most of 1942 surveying Scottish waters, apart from a few weeks in Iceland. Following a refit HMS SCOTT again returned to Scottsh waters for most of 1943, again with two brief periods in Iceland.

In 1944, HMS SCOTT took part in two very cold invasion exercises in the Firth of Forth: a battalion of infantry was landed on the beaches at Gullane, and the port of Methil was 'taken' from the sea. In June 1944, the ship sailed from Spithead in the van of Invasion Fleet and D-Day found her laying marker buoys in the approaches to the invasion beaches and charting obstructions and natural dangers off the Normandy Coast.  HMS SCOTT also assisted with the construction of the Mulberry Harbour at Arromanches by fixing the positions of the Blockships and Phoenix Piers. Only a few days after this harbour was compete, HMS SCOTT's chart of Arromanches wartime harbour was available to the fleet.

Subsequently, HMS SCOTT was actively engaged in surveys of liberated ports and harbours, many of them extensively damaged, including Morlaix, Boulogne, Brest and Dunkirk. She also surveyed the points where the several PLUTOs (Pipe Lines Under The Ocean) came ashore. With HMS Franklin she carried out surveys and laid marker buoys in the Scheldt River, thus opening the port of Antwerp to Allied shipping.

On 13th October 1944 off Boulogne, five of HMS SCOTT's crew were drowned when they attempted to rescue three soldiers seen adrift in a dory during a gale.

Post-war, HMS SCOTT was employed on general hydrographic duties in Home Waters, locating and sweeping many of the war-time wrecks and re-surveying large areas off the coast of Great Britain. The ship finally paid off in late 1964 and was sold on 24th June 1965 to West of Scotland Shipbreaking where she arrived on 3rd July 1965